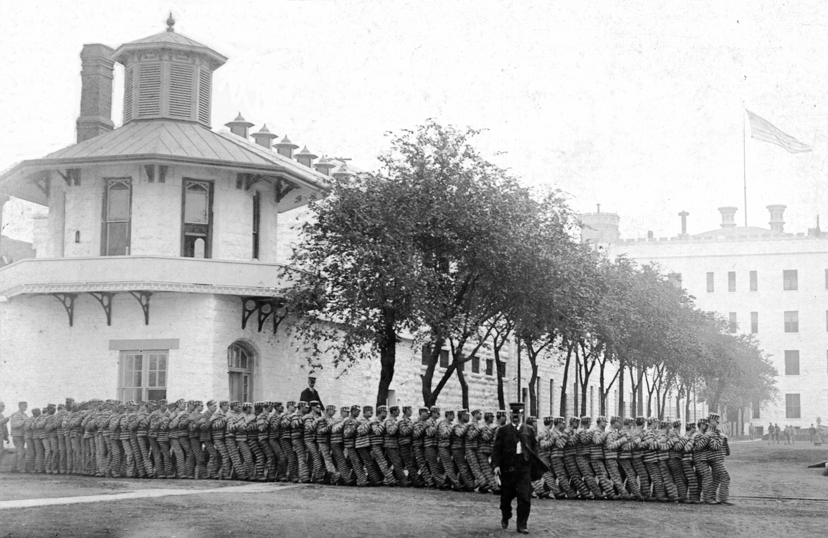 October is the month for haunted houses, highways, hotels, ballrooms, prisons, and theaters! And Illinois Route 66 offers plenty of venues where spirits are said to be seen.

October is the month for haunted houses, highways, hotels, ballrooms, prisons, and theaters! And Illinois Route 66 offers plenty of venues where spirits are said to be seen. Five of these eight haunted spots are open to the public at certain times with varying circumstances and fees.

OLD JOLIET PRISON – Joliet
Notorious killers Richard Speck, John Wayne Gacy, and “crime of the century” murderers Nathan Leopold and Richard Loeb were all housed at the old Joliet Prison, and, of course, it was the fictional home of the Blues Brothers, Jake, and Elwood. Back in 1915, Odette Bordeaux Allen, wife of the prison warden, Edmund Allen, was said to be beloved by the inmates and was known as the “Angel of Joliet” due to her lovely singing voice. After Odette was murdered, the inmates rioted, demanding that her suspected killer be turned over to them. Although the prison closed in 2002, “with numerous executions having taken place at the prison, rumor has it that many of the inmates may be serving time as ghosts,” according to the Illinois Office of Tourism. After some restoration, the prison on Collins Street opened in 2018 for tours.

RIALTO SQUARE THEATRE – Joliet
Built in 1926 as a vaudeville venue, this beautiful movie palace is said to be the site of multiple ghostly hauntings. Visitors and employees have claimed to see a female form, said to be a former actress, floating throughout the theater. Some believe that a couple who fell to their deaths sometime in the theater’s past can sometimes still be seen, wearing their period clothing, in the balcony, from where they supposedly fell…or jumped. A young boy is also rumored to have been seen in ghostly form. Long a popular attraction for paranormal investigators, the cast of the TV show Ghost Hunters have visited more than once, calling the theater a “holy grail” for paranormal investigation. The Rialto is open as an operating theater.

DANA THOMAS HOUSE – Springfield
The Dana Thomas House in Springfield, considered to be one of Frank Lloyd Wright’s most elaborate home designs, was planned for Susan Lawrence Dana in 1902. The construction of the multi-level home cost her $45,000 plus another $15,000 for all the coordinated furnishings designed by Wright. Susan was a world traveler, a political activist, a patron of the arts, and a seeker of spiritual truths. From 1904 until the late 1920s, Susan lived in the house and was said to hold seances thereafter suffering the loss of numerous loved ones. Volunteers at the home have reported humming noises, floating curtains, and a woman dressed in black on the stairs. The Dana Thomas home is located at the corner of Lawrence Avenue and Fourth Street and is open for tours.

INN AT 835 HISTORIC BED AND BREAKFAST – Springfield
Bell Miller, an enterprising young businesswoman, became a well-known Springfield florist for several decades beginning in the 1890s. She hired architect George Helmle to design a three-story, yellow-brick building as luxury apartments, which enabled her to have her own apartment in an age when a lady usually did not have her own residence. The beautiful building was constructed in 1909 at 835 S. Second Street in an area once known as “Aristocracy Hill.”  In 1994, the building underwent a total renovation to transform it into luxury guest rooms. Known today as the Inn at 835 Historic Bed and Breakfast, both guests and staff believe that Bell never left her home. A woman’s voice or the clink of a candy jar lid is occasionally heard, and the elevator sometimes takes a guest to a different floor, regardless of which button is pushed. The Inn at 835 is an operating bed and breakfast.

LOOMIS HOUSE/ST. GEORGE HOTEL – Carlinville
Architect Elijah E. Myers was known in the late 1800s for his prolific and talented designs, and one of them was the Loomis House/St. George Hotel. In 1870, the elegant French Second Empire opened for business on the east side of the square. The hotel boasted 50 well-appointed rooms, and the establishment played host to politicians, businessmen, and high rollers. The owners were George Holliday and Judge Thaddeus Loomis. When the facade was faced with the same limestone as the courthouse, Loomis and Holliday sunk lower into the scandal caused by their budget overruns with the construction of the “Million Dollar Courthouse.” The building changed hands multiple times. In the 1970s, the Loomis House on the second floor was a popular area restaurant. In recent decades, the upper floors were abandoned to slowly decay. Investigations have claimed numerous signs of paranormal activity.

COLISEUM BALLROOM – Benld
The Coliseum Ballroom was built in Benld in 1923 and opened in 1924 by brothers Dominic and Ben Tarro on what became U.S. Highway 66 (now Route 4). The 10,000-square-foot dance floor was the largest between St. Louis and Chicago, and the popular nightspot was the perfect complement to the brothers’ bootlegging activities. Dominic was murdered in 1930 and his body dumped in the Sangamon River following two arrests for bootlegging. His widow Marie and later his daughter Joyce ran the nightspot until 1976. That year, Joyce, although in the process of retiring, was on the job for the Valentine’s Day celebration. Early next morning when Joyce returned to her home with the night’s receipts, she was gunned down by two intruders. The ballroom later became an antique mall, and in 2011, it burned to the ground. During the years as an antique mall, the spirit of a woman was often seen blending in with groups of customers.

THE SEVEN GATES OF HELL – Collinsville
A series of railroad overpasses stands over winding country roads in a hilly area once the location of coal mines and a zinc works. Graffiti and vegetation cover the old overpasses while the cracked and crumbling undersides loom dark and shadowy. The roads twist and turn to wind back and forth under the railroad tracks. These are the Seven Gates of Hell, according to a half-century’s worth of local lore. If you drive through all seven gates in order, the Hell Hounds may be released. Or, the veil between this world and the next may be ripped open, or a Ghost Car may show up. Other eerie stories include a hanging and signs of sacrifices and rituals. If the ghostly sightings aren’t due to any of those unproven stories, perhaps it’s the spirit of the woman, holding her baby daughter, who jumped into a deep well in 1938. Or the young man whose skull was fractured by a freight train one night in 1955. Or the three coal miners crushed by a runaway cable car in one of the mines in 1950. The Seven Gates of Hell begin on Lebanon Road on the east side of Collinsville in an area known as Lumaghi Heights. (Although not on Route 66, it isn’t far away, and this wild ride is a popular spot for haunted thrills.)

MINER’S THEATRE – Collinsville
Local miners contributed 1% of their pay for a year to fund the building, which opened in December 1918, at 204 W. Main Street. The first floor held a large auditorium used over the decades for vaudeville, live entertainment, movies, community gatherings, and political rallies. It closed in 1984, but in 1985 local citizens formed the Miner’s Institute Foundation, and the building was placed on the National Register of Historic Places in 1985. The magnificent building is open occasionally for special occasions as a local group continues efforts to restore it. Ghost stories have included a woman prankster who hides things, two brothers, one of which killed the other, a woman pushed from the catwalk by a jilted boyfriend, and a performer named “Lola” who appears on the stage. The theater opens for occasional events. The photo of the Old Joliet Prison is courtesy of Joe Sonderman.  Jim Marcacci submitted the photo of the Coliseum Ballroom.  All other photos were taken by the author.

Cheryl Eichar-Jett is the author of numerous books and articles about Route 66.  Find her at www.route66chick.com and www.cheryleicharjett.com. 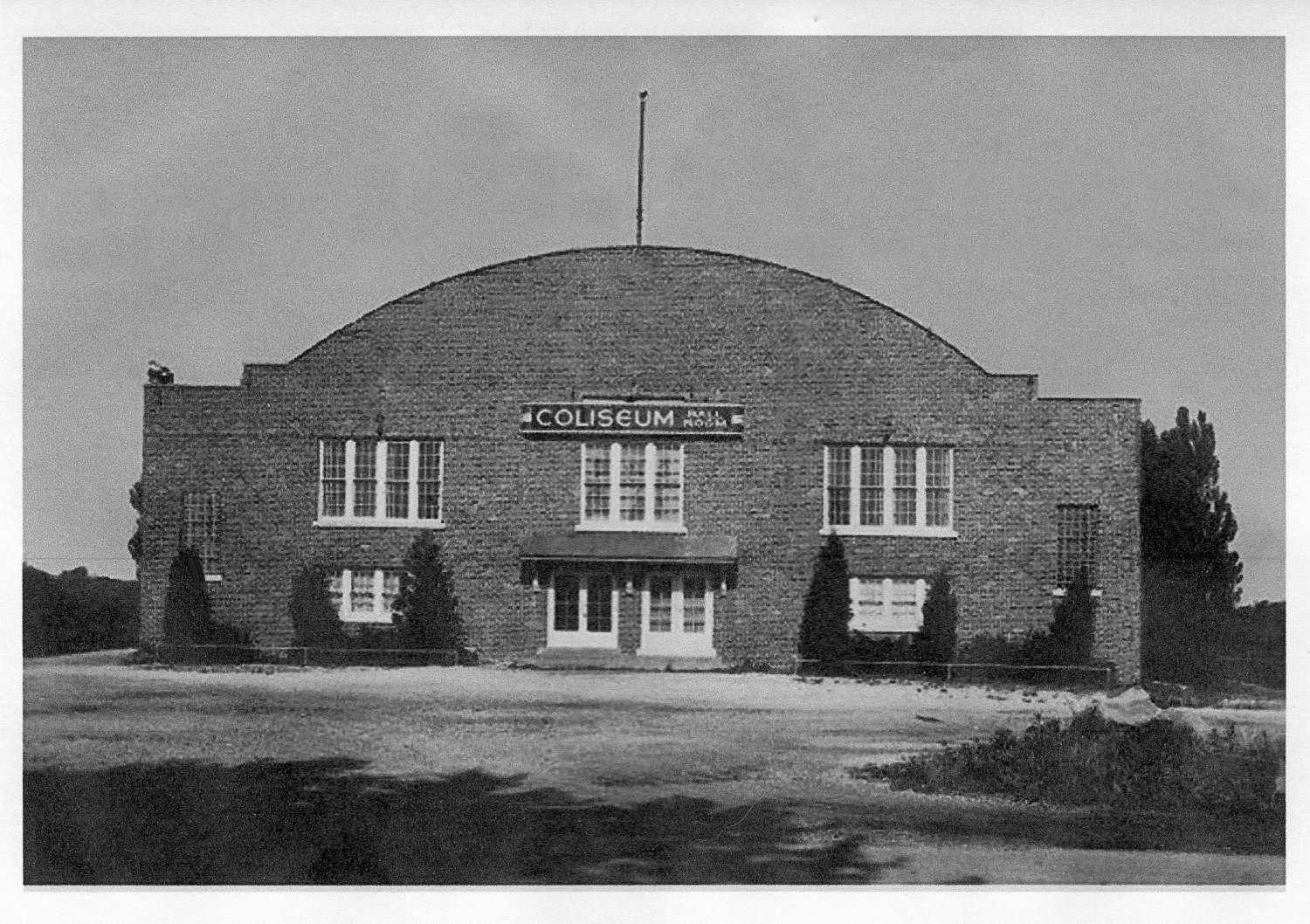 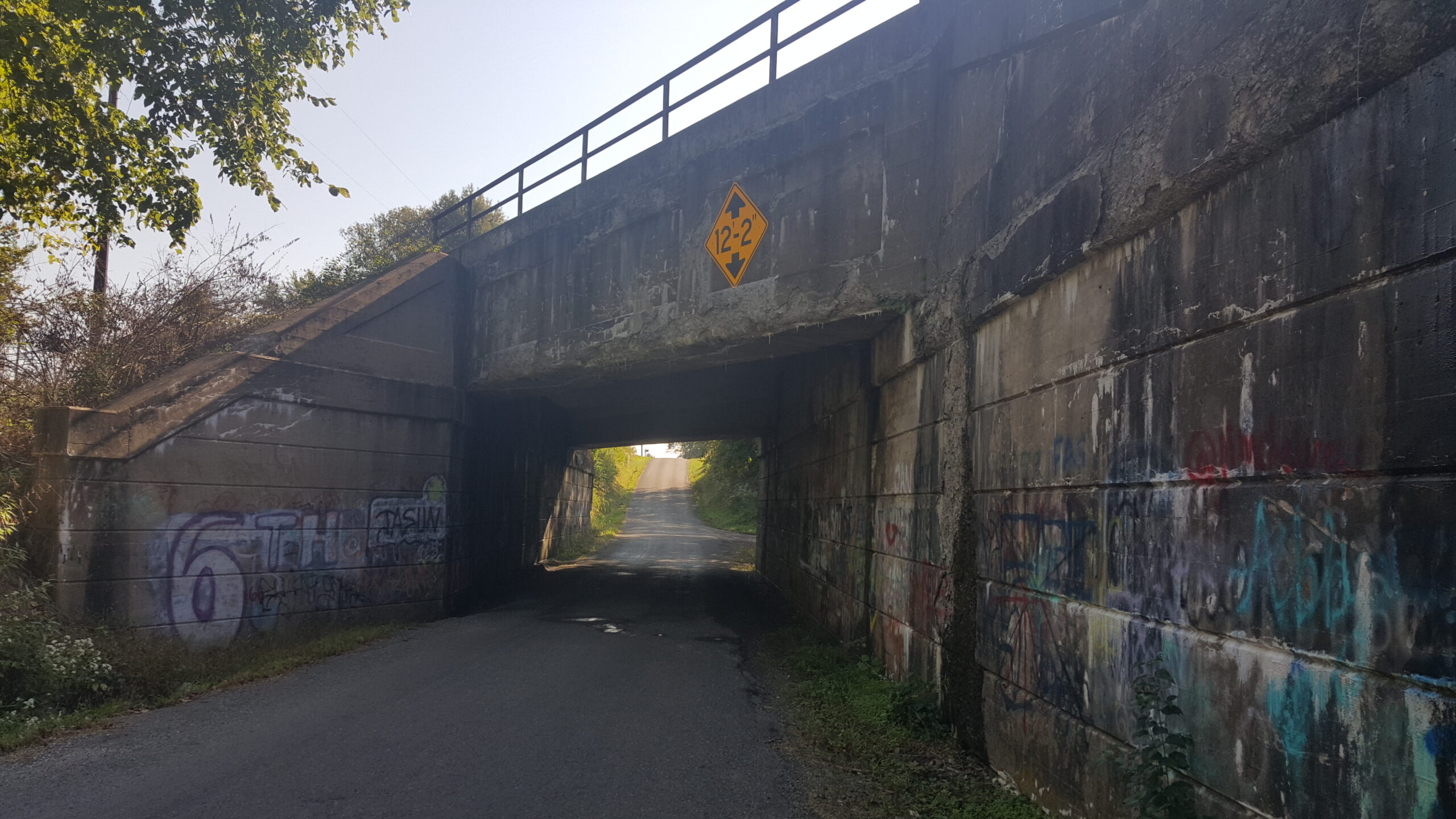 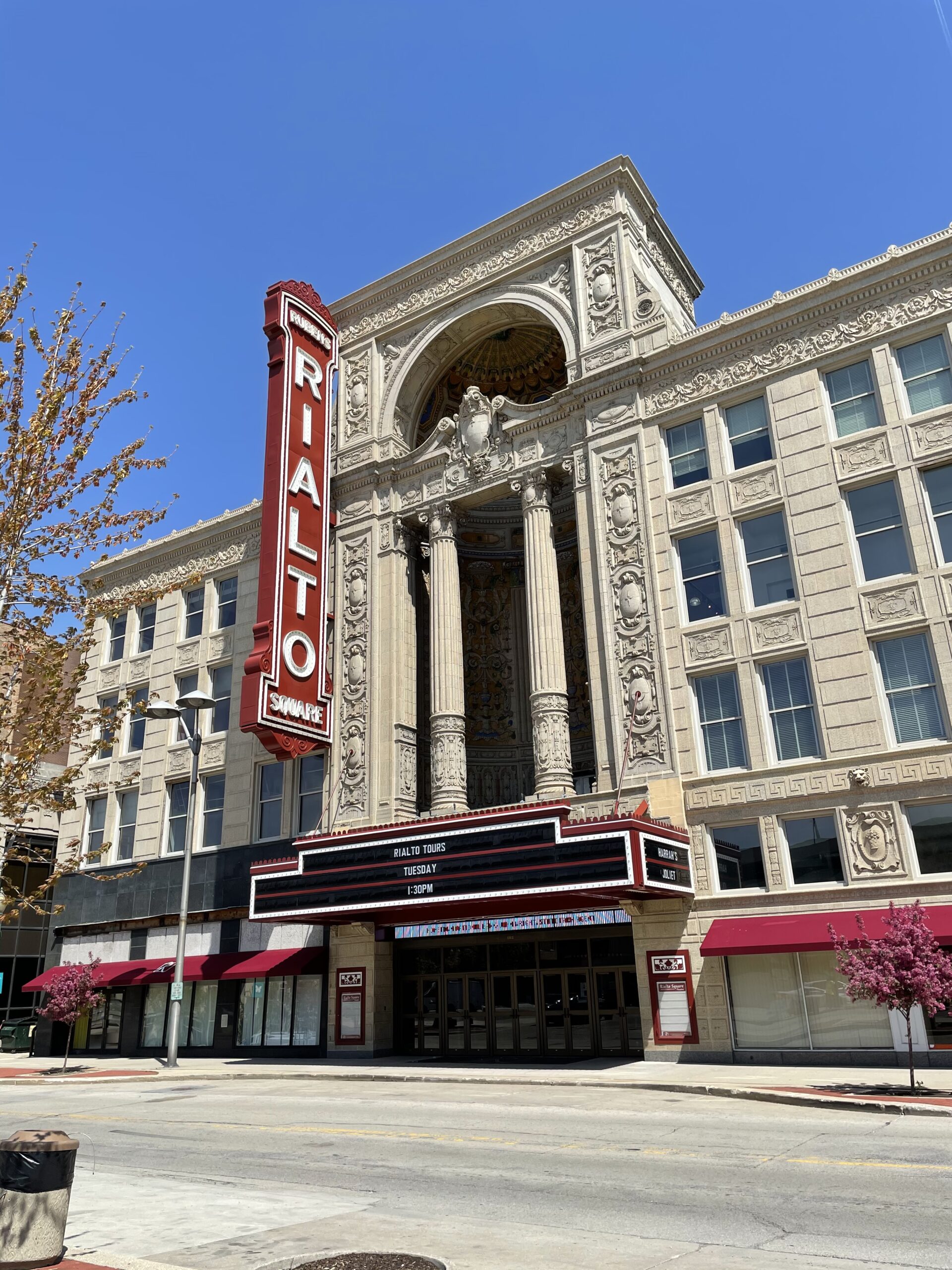 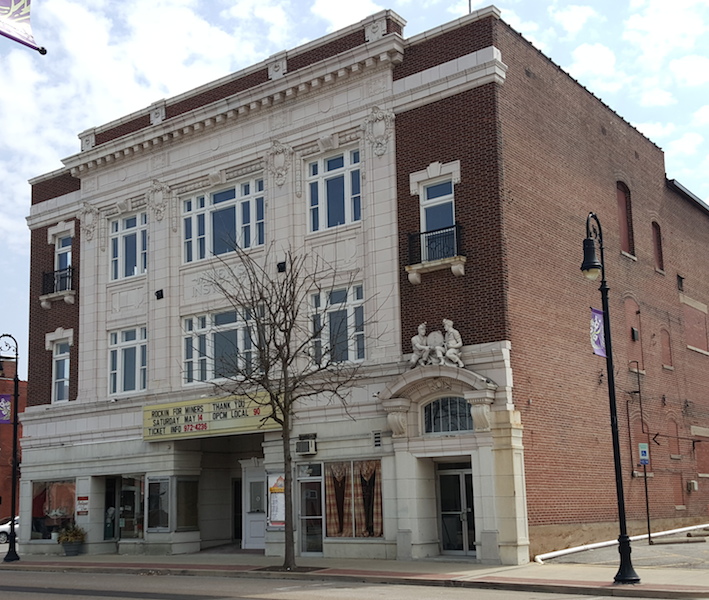 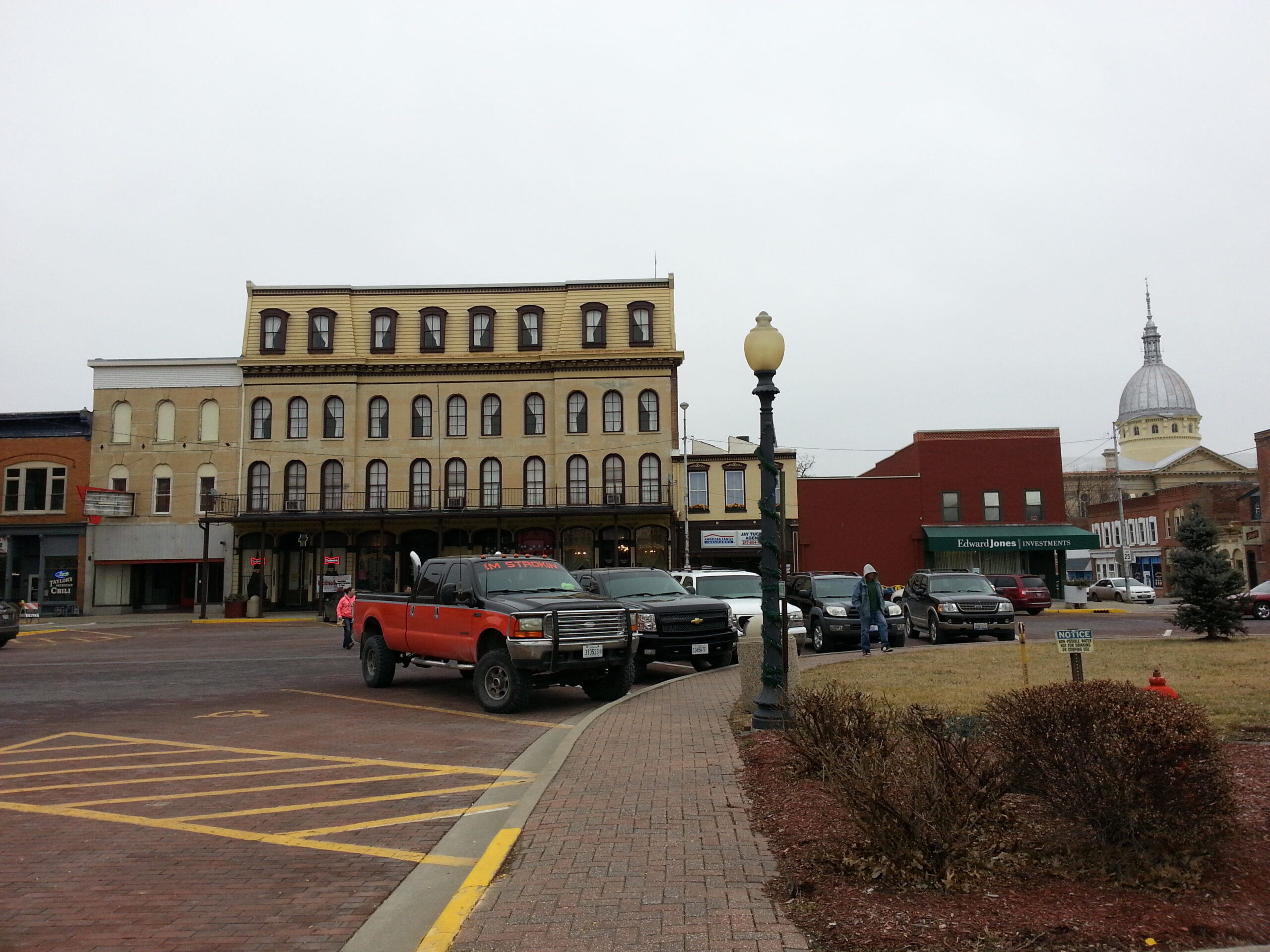 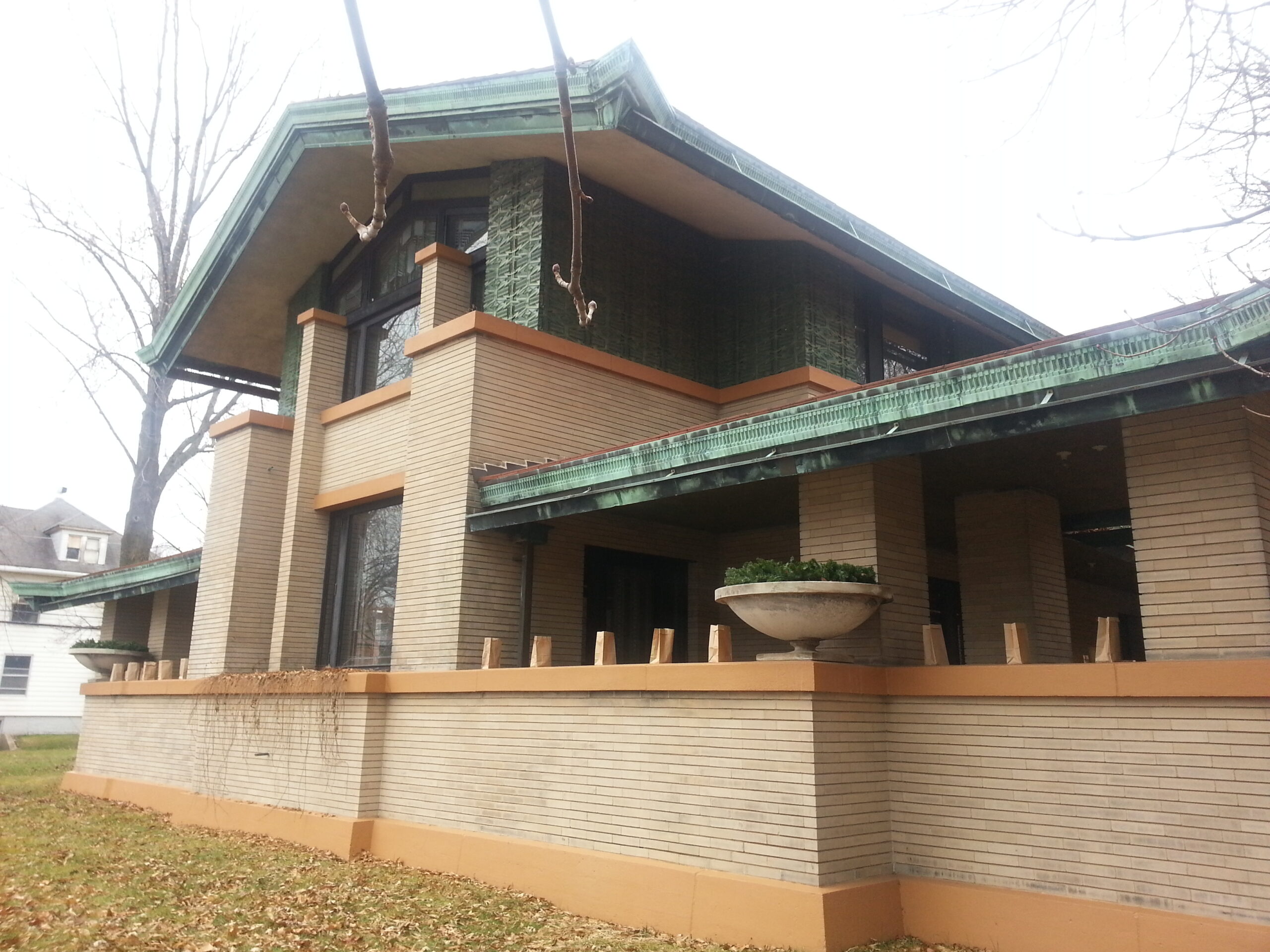