Make Your Next Meal Totally Off The Wall 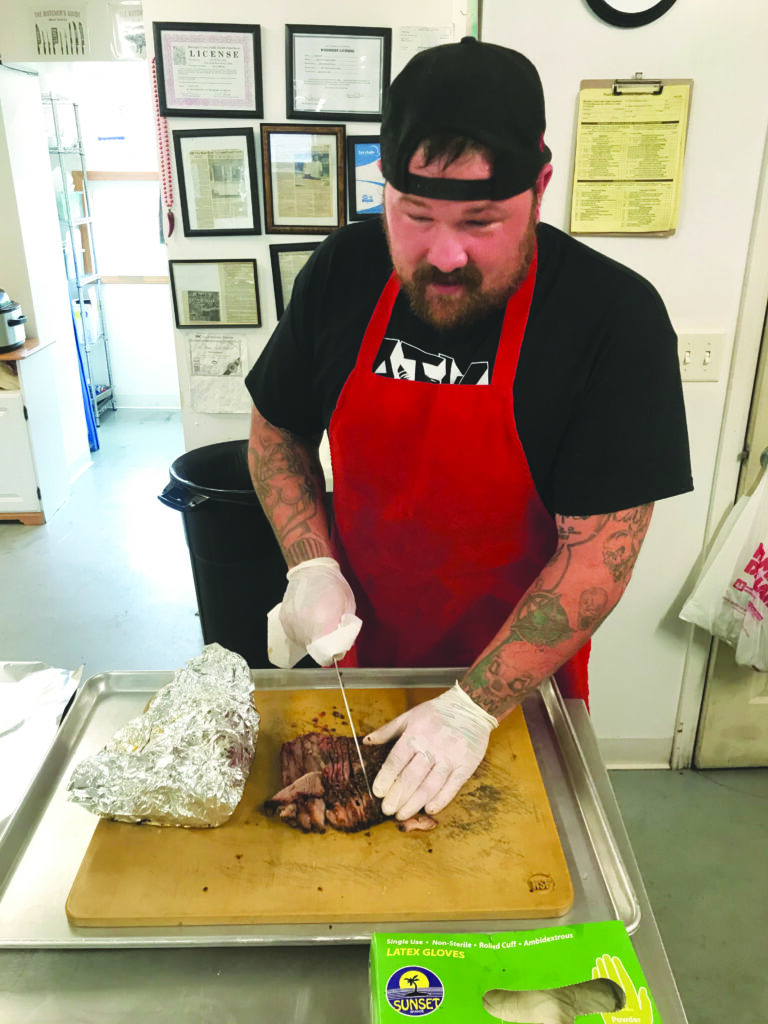 Off The Wall Tacos and More, the Area’s Newest Food Truck Sensation, Now Also Has Restaurant in Benld to Satisfy Your Cravings
By Tara L. Cale

Let’s admit it, we all did something, or maybe more than one thing, during our youth or young adulthood, that we are not too proud of. Benld resident Colt Dean

is not afraid to tell people that in his younger days he put some “not so good things” into his body. He dropped out of school at the age of 15. How can a high school drop out support himself? Colt Dean started cooking for a living. And he discovered that not only did he love cooking, but he was also very good at it. He envisioned one day having his own restaurant, or at least owning his own business, in the food or hospitality industry.

That’s not an easy industry to break into, let alone, compete effectively in. Not without a degree or formal education in the culinary arts. Certainly not without even a high school diploma. Also, without those things, your rate of pay is often minimum wage or a little better. Saving money to fund your dream could be a long, tough road. But his passion grew and he had a plan. So he got clean and started implementing his plan. He cooked in other highly acclaimed kitchens and learned from some of the best. He learned barbecue techniques and so much more from Tim Snodgrass at the former Art’s Route 66 Barbecue, once a hot spot on Interstate
55/Historic Route 66 in
Farmersville. The Ariston Cafe in Litchfield, another favorite of Route 66 fans – and people who love good food in general – had the pleasure of Colt Dean on staff as a chef. And for the final five years before implementing his plan for self-sufficiency, Dean was employed at Gianna’s Pizza and Italian Ristorante in Hillsboro (now in Litchfield).
In 2016, Colt Dean finally struck out on his own with Off The Wall Chef Services. The name “Off the Wall” came from Dean’s concept that his food had to be different. Special. Amazing.
Off the Wall (OTW) covered about anything that had to do with food. They catered birthday parties, weddings, family reunions, and more – and even held cooking classes. Although OTW got rave reviews from everyone that hired them, the business got off to a bit of a rocky start, due mostly to
demographics. But, not one to stand still, Dean wanted more – more recipes and more unique dining experiences to make the customers go WOW! So in May of 2019 he bought a food truck – which was/is all the rage – to fill the days and nights that OTW Chef Services was not already booked. And even with high personal expectations, even Colt Dean himself could not have predicted the overwhelming response that he received. 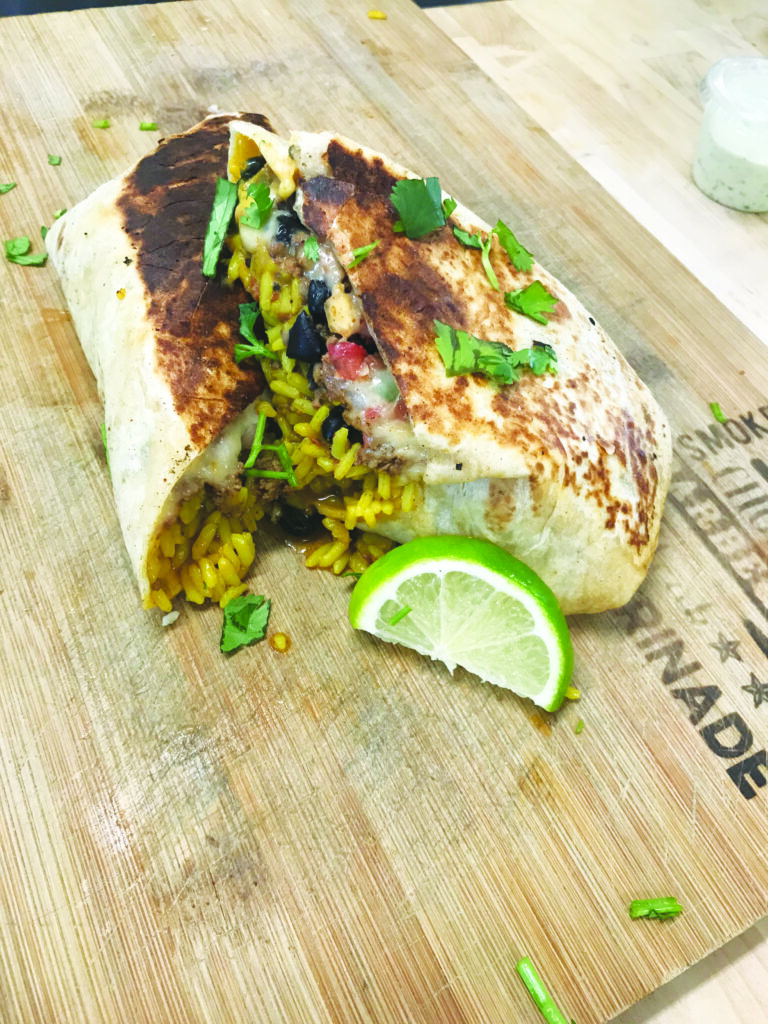 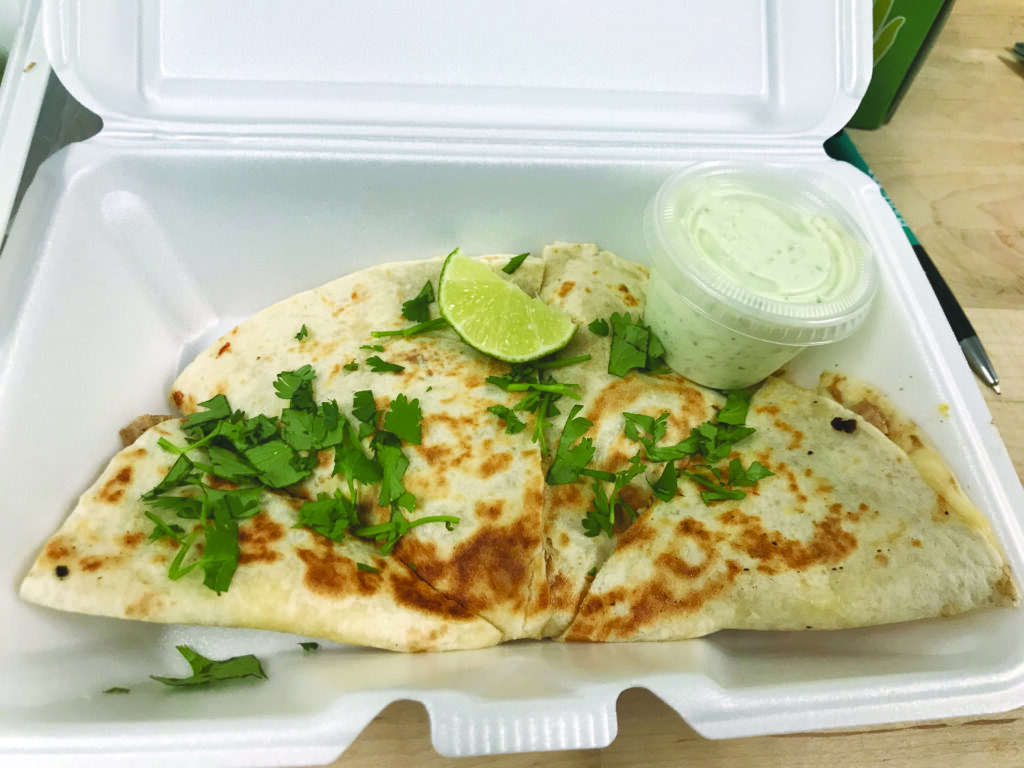 In mere months after opening his food truck, he was looking for a building to serve up his off-the-wall menu on a more consistent basis. In November, he found it, conveniently located in his own small home town of Benld, right next to the library.
Since then, the business and menu have both evolved.
“When I first got the food truck, I had a variety of items including standard fair for food trucks – street tacos,  nachos, burgers, etc.,” Dean said. “But what I realized was that the customers were mainly ordering our Mexican type offerings. I took that and ran with it. I pushed the envelope, creating off-the-wall variations to some standard favorites.  And the customers loved it!”

Now the business is more affectionately known as Off The Wall Tacos.

Tony and I had heard of OTW Tacos. But we get to Benld only about one time per month, when we are delivering The Buzz, on a Monday, and OTW Tacos is closed. We’ve seen the food truck at various businesses, but never felt inclined to stop. It’s a taco truck. No big deal, right? Wrong!

So recently, I had to make a trip to Benld to pick up items I purchased through Facebook Marketplace. Tony texted and said, “See if that taco place is open. My  parents said it is really good.”
Now I have to tell you, I did NOT want to stop. I had been working in the yard and garden all morning, I was wearing old, ripped clothes and was covered with dirt.
I wasn’t wearing makeup and probably didn’t smell too good either!  I drove by secretly hoping they were closed. But they were open. So I parked my “unmarked
vehicle” (not The Buzz van, I was incognito) and walked up to the window. You see OTW tacos is pick-up and drive-thru only, although there is one picnic table if you just can’t wait to get home to eat.
As I approached, the window quickly slid open and a masked man (COVID-19 you know), said “Hey baby, where have you been? I have been waiting for you!”
I thought surely someone else was behind me that he was talking to, but I looked – no one else around – he was speaking to me.
I placed my order – probably a bit too large of an order – but it was almost 2 pm and we hadn’t eaten all day. I told him we would not judge his food this time, as it would be over an hour before we could eat it. He assured me that it would be as good, or maybe even better after marinating in all the flavors, whenever we did eat it.

When I got home with the food I didn’t really expect it to still be all that good, but he was right. It was amazing! And I was right too. I ordered too much! But we still ate it. All of it. Because it was SO good! 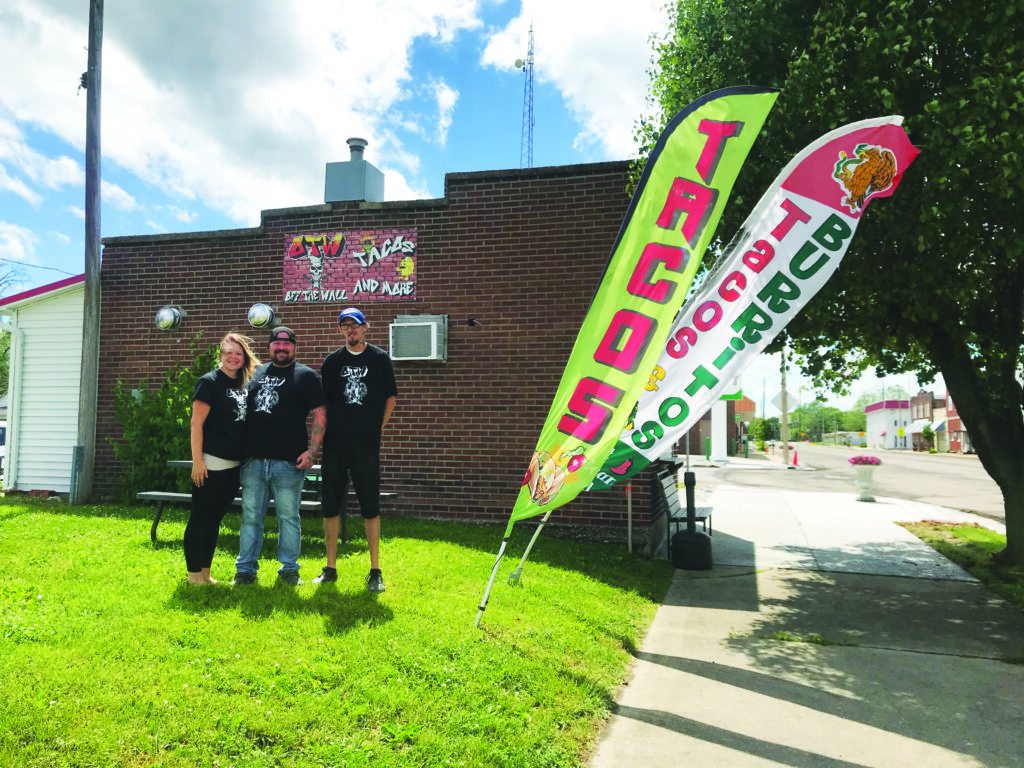 Tacos. Burritos. Nachos. The like. No big deal, right? Wrong! I said that already. But, let me explain. Chef Colt Dean lives by his mantra, his catchphrase – OFF THE WALL. And his food is exactly that. This is food created, with passion, with artistic intention, with amazing flavor, just for you. Colt Dean and his wife, Heather, and head chef, Daryl, do all of the shopping for  OTW themselves.  They choose only the freshest, highest quality produce, and ingredients to prepare your meal. They make all of their own sauces in house, including their incredible signature CREMA SAUCE, which I was introduced to with my initial order of a Shrimp-a-dilla (shrimp quesadilla). It almost tastes like it has a sour cream base, but Chef  Colt Dean assures me it does not. And I don’t care. All I know is that it is so good I could eat it with a spoon! The menu at OTW Tacos is fairly simple. Street tacos, quesadillas, enchiladas, and burritos. Then again, it’s not that simple. Because in all of the offerings you have your choice of meats: ground beef and chorizo, shrimp, chicken, pork, chipotle beef… and now… brisket. Chef Dean has recently acquired a “new” smoker and has been perfecting smoking brisket. Tony says it’s probably the best brisket he has ever had!

All OTW tacos, burritos, quesadillas, and enchiladas are made with flour tortillas that are first lightly fried, and then grilled, adding a unique twist to what is sometimes ordinary. Also on the menu is Mexican Street Corn (you MUST try this), nachos, sides of black beans or rice, white chicken chili, churros, and a variety of bottled Mexican sodas.
In addition to the standard menu (which will soon have some new additions), they have daily specials. One thing that is available, but not on the menu, is their popular Super Grande Burrito. You have to specifically ask for this item, and trust me, you better have someone to share it with. The Super Grande Burrito is two of the 12” Grande Burritos (you actually need a person to share the regular Grande Burrito with) combined and includes everything except the kitchen sink!
“If you put everything you have into your food – your heart and soul – you can’t fail,” Dean said.
But he was also quick to compliment and credit his staff for helping OTW Tacos become such a huge success in such a short time.
“ I love my employees. We all complement each other,” he said. “I ask very little of them. Just work hard, make good food, and keep it clean.”
Speaking of clean, Chef Dean offered to let us look inside his refrigerator.
“Cleanliness is paramount with me,” he said. “I want you to be able to open my refrigerator at any given time and say ‘Holy Cow’ that is clean!”
And although his refrigerator and restaurant are clean, his food is a bit …messy. “I also believe food should be fun, that food should be messy,” he laughed.
So when and where can you get some OTW Tacos? The food truck is out and about on a regular rotation at private businesses in primarily Macoupin and Montgomery Counties and is known to be seen at Michelle’s Pharmacy (Gillespie, Carlinville, Bunker Hill), Pearl Essence (Staunton) and #5 Mine and Winery (Benld), just to name a few. They post their food truck rotation on their Facebook page. If you can’t make it to a location where the truck will be, you can always swing by their brick and mortar location at 300 Central Ave in Benld (next to the library). And let me warn you … you may see a line at the truck, or even the restaurant … but don’t let that deter you. There is a line for a reason and trust me when I say, OTW Tacos are worth the wait. I hope you get in line early though because the taco truck always sells out wherever it goes. 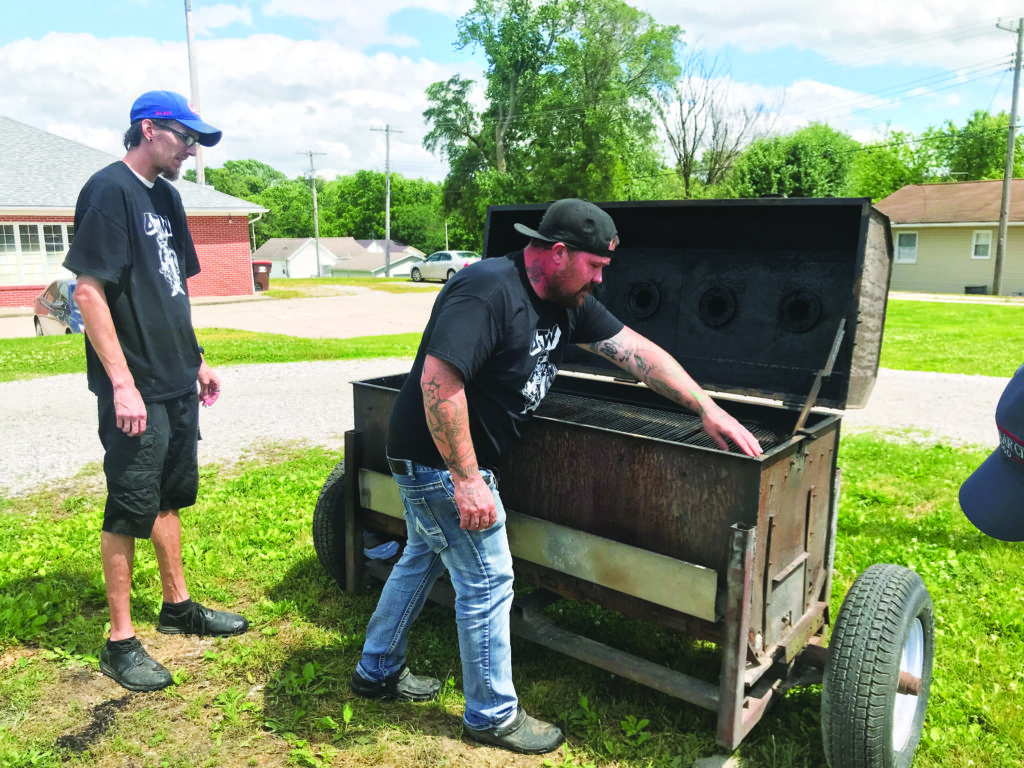 The hours and menu for Off the Wall Tacos are changing. To keep updated, follow them on Facebook (Off the Wall Chef Services). For more information or booking, possibilities call or text Chef Colt Dean at (217) 710-8001. 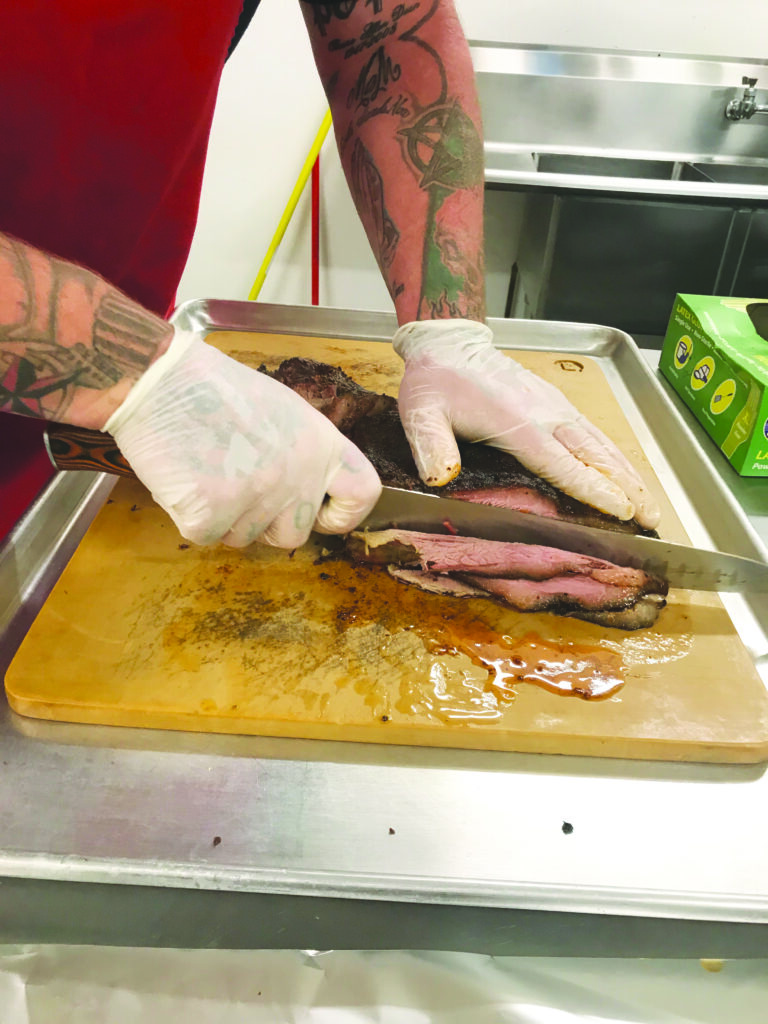