Mooney Hill Produce In Edwardsville Is As Good As It Gets 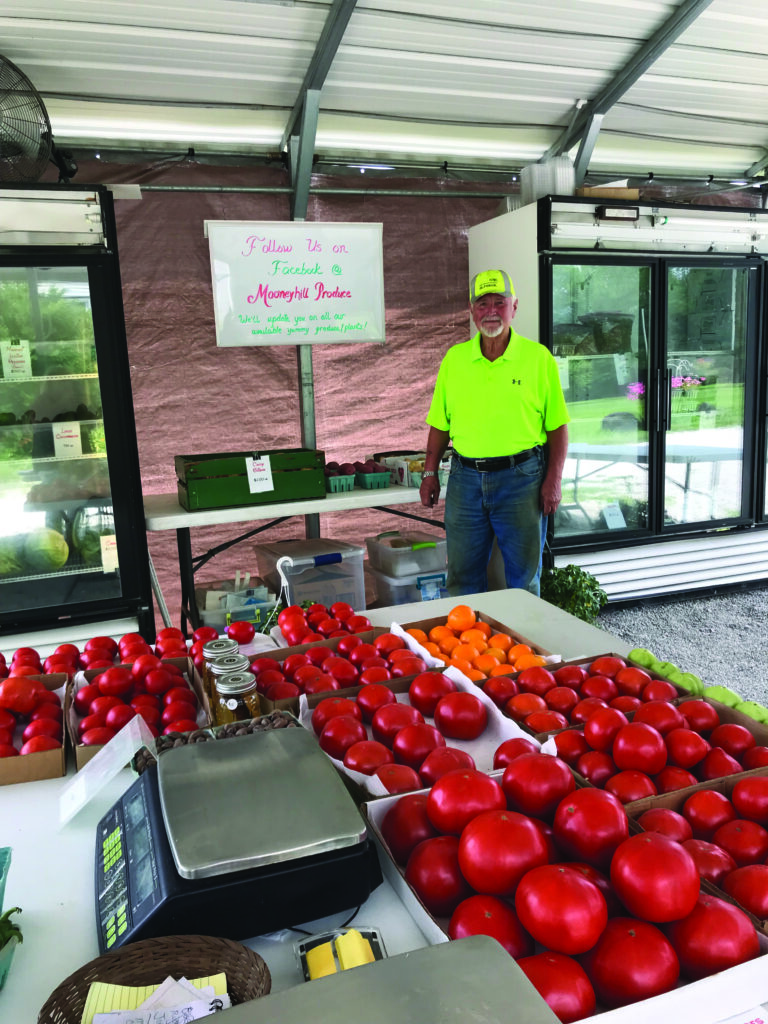 David File in the produce stand which is currently loaded with tomatoes, pecans, onions, cantaloupe, blackberries and more. Mooney Hill has 180 tomato plants and 9,000 onion plants on site in order to meet the demands of their customers.

Mooney Hill Produce In Edwardsville Is As Good As It Gets

If you have traveled down Illinois State Route 157, either entering or leaving Edwardsville, you may have noticed a conglomerate of signs on the curve, right at the edge of town.  The hand written, sandwich board signs have cute little sayings advertising a variety of produce that is available if you turn in the driveway, the entrance to Mooney Hill Produce. Produce available depends on the time of the year. But, if you have ever ventured up that drive and made a purchase, you are aware that the items you purchased are hopefully “as good as it gets.”

“As Good as It Gets” is actually the slogan for Mooney Hill Produce.

“It may not be the prettiest, but it’s going to be the tastiest,” said David File, who owns Mooney Hill Produce with his wife, Dale. The produce is grown by David, a few cousins, and a few friends.

Mooney Hill Produce started in 2008, without any forethought, and without any plan. It kind of just “happened.”

David explained that for years he and his wife hosted a large party on the weekend after Labor Day for the now defunct Spanish Lake Baptist Church. The Files would provide the meat and beverages, and attendees would bring side dishes.  But one year David and Dale decided they also wanted to have homemade raspberry sherbert ice cream at the event.

“You know, White Mountain makes the best ice cream makers, so I bought two of them,” David said. “Dale bought all the ingredients to make the ice cream, including fresh raspberries.”

“The ice cream was amazing,” he continued, “But it ended up costing us about $60/gallon to make it after purchasing all the ingredients!”

That experience led them to start their own raspberry patch. Then they added blackberries. And tomatoes. Before they knew it, they were planting, harvesting and selling a plethora of fresh produce, in large quantities, to area residents. For a time they took their produce to the Edwardsville farmers market, but soon had amassed such a loyal following that they can now sell more effectively and efficiently from their homesite location.

David said people will drive for 30-40 miles  for their produce because they know it truly is “as good as it gets.”  One of the reasons for that is that he and his family partners, which include Jim Stoecklin (Greenville), Glen Stoecklin (Pocahontas) and others, doctor the soil, adding micronutrients that not only enhance the flavor, but enable them to grow bigger, and grow better.  David also has a “test” garden which allows him to experiment with different fertilizers, different watering methods, and other options that can improve the growing process, and the flavor, of the produce.

Mooney Hill also has bee hives on site for pollination of the plants, and they do sell the honey, when available. As of the time of the interview for this story, Mooney Hill only had a few bottles of their honey left. It’s safe to say that by the time you read this, there are no more available for this year.

Normally when I do story interviews, I go solo, while Tony is out handling ad sales. But if you read The Buzz often, you know that we are novice gardeners, and are always open to learning more, so we both went to Mooney Hill. After I gathered the bulk of the information needed for this story, Tony stayed at the produce stand with David, while Mooney Hill’s “right hand man,” Craig Dodson, gave me a closer look at the more intimate details of the farm’s operations.

Craig has been with Mooney Hill for the past five years, but has been involved in gardening/produce for over 10 years. He told me that he has been involved in growing plants and vegetables since he was just a child. The depth of his knowledge was quite impressive, and I could easily see why he is highly regarded at Mooney Hill. I was happy when Craig suggested we take the farm’s golf cart for the tour, as it was very hot outside, and Mooney Hill covers quite a bit of ground, as you can imagine.  Included in what Craig showed me where the 180 tomato plants and 9,000 onion plants – red, white, yellow, candy and Walla-Walla onions – on site.

I had never heard of Walla-Walla onions, but Craig explained that they are a sweet onion, even better than Vidalia, and that you won’t see them at your local grocer, because they only keep for a few weeks before spoiling. David said that he has grandchildren that will eat them like apples! In fact, my research said they are best eaten raw or very slightly cooked. Craig gave me a Walla-Walla to bring home, but I haven’t had the nerve to bite into it raw, yet.  I will, soon. I think. Or else I will use it slightly cooked in a dish for dinner this week.

I did however sample one of the tomatoes, and I must say, it was second to none. And I did not leave Mooney Hill without a plentiful supply of their tomatoes, as ours are not yet ripe. Craig also encouraged me to try a freshly picked jalapeno. I explained that I do not like jalapenos; they are too hot for me. No problem, he handed me a “no heat” jalapeno. It tasted pretty much like a green pepper.

In addition to the multitude of produce available at Mooney Hill, Dale offers a variety of plants and flowers for sale.  Various flower plants, hanging baskets, daylilies, lily of the valley, canas, elephant ears – they specialize in hostas.  Herbs and banana trees are also available. Banana trees are planted along two edges of one of the garden plots (they have three plots, downsized from five plots in past years) and are mostly a novelty/decorative item. A tropical plant, they have to be moved inside during the winter. Several of them are many years old and quite large, so that is quite a feat. A couple are blooming and have bananas. They do have some hardy banana trees that do not have to be moved inside.

Mooney Hill produce is located at 4578 N State Route 157 in Edwardsville. Don’t worry, if you get close, you will see the signs! Mooney Hill is open at least through Thanksgiving, and sometimes until Christmas, just depending on the weather and crop production. Of course all produce is seasonal. David said they are pretty much open 24/7 because it’s basically self-serve with a money box in the produce stand, plus motion detector lights and alarms to notify if they have customers – or marauding deer.  They will come out and assist you if they are available. Chances of that are greater during daylight hours.

“We have the best customers ever – from locals, and people traveling through the area – to customers that drive quite a distance, because they know our produce is usually as good as it gets,” David said. “I especially love those who also garden or work with the soil in some aspect. People that work with the soil are more in touch with reality. More grounded. They appreciate the work and love that goes into growing quality produce.” 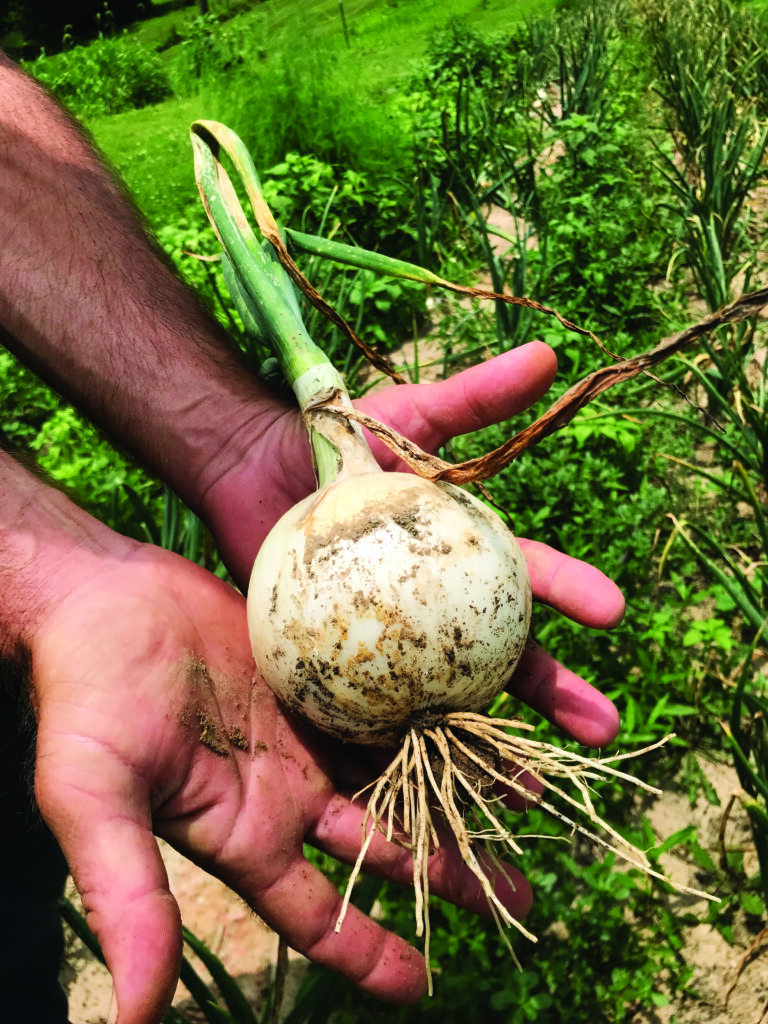 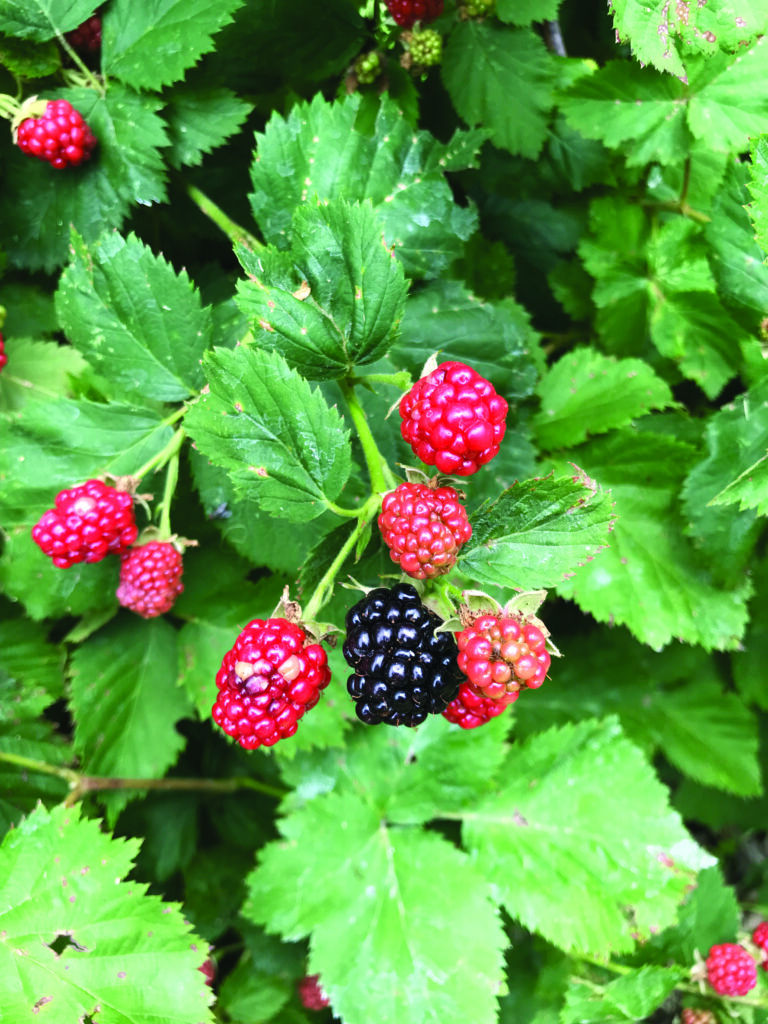 File said customers drive great distances for their melons and blackberries, which are currently both available at Mooney Hill. 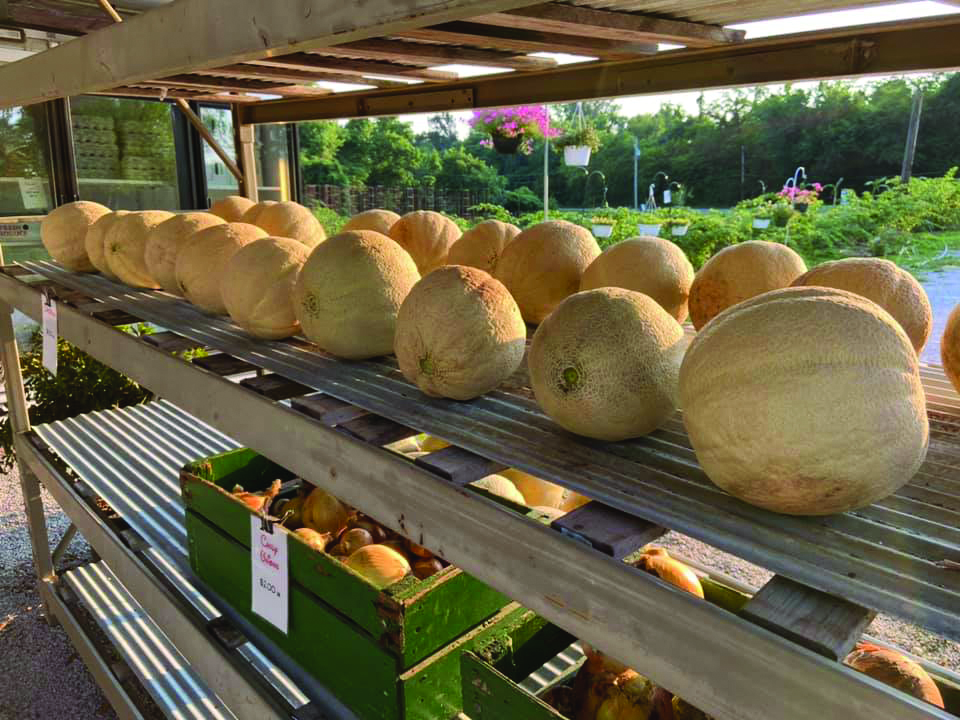 File said buying a cantaloupe is  “… the best $5 you will spend this week!”