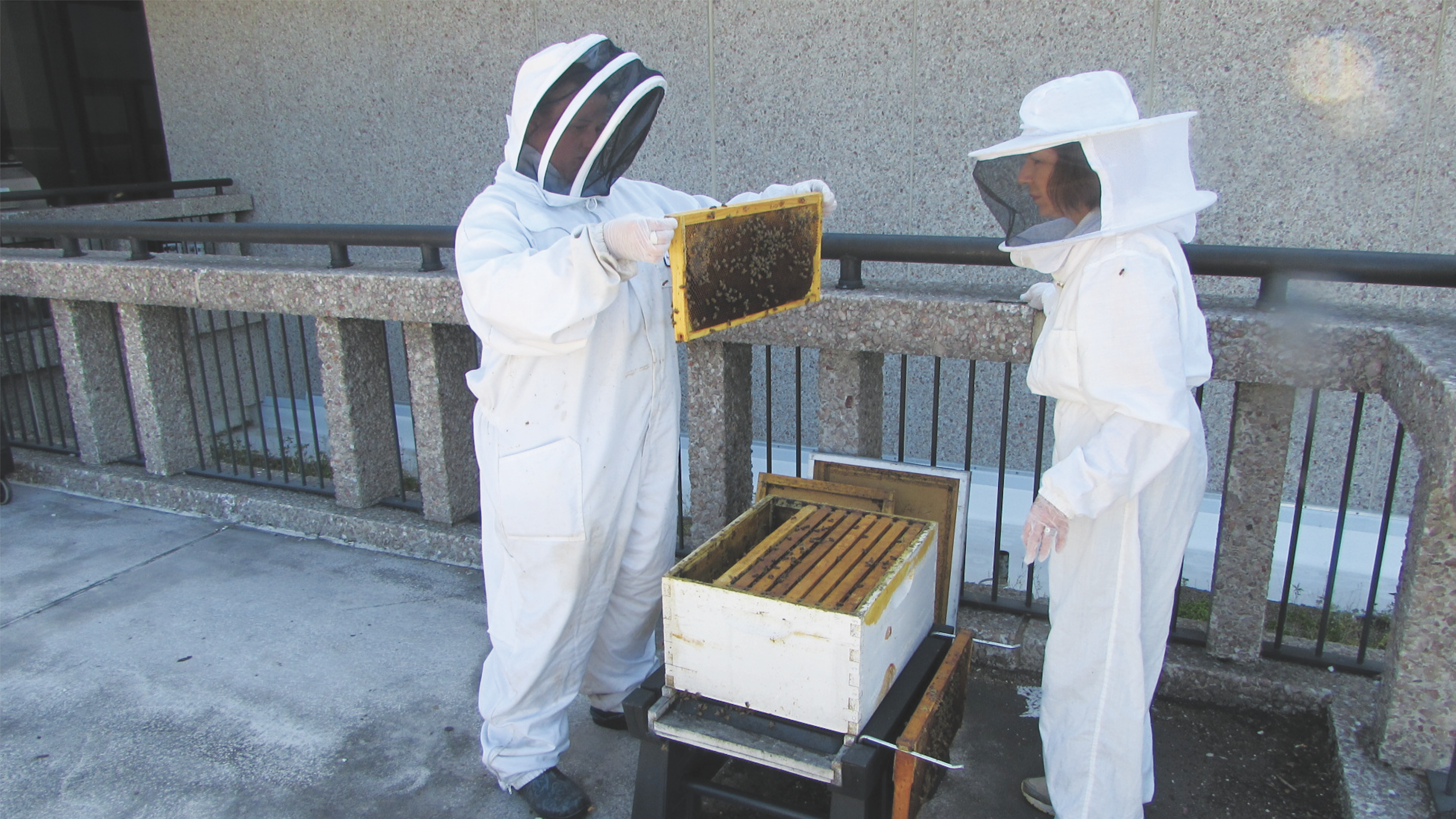 I have a bit of a soap opera for you. I am going to outline this summer’s trials and tribulations of a particular colony of honey bees that reside on the balcony garden at SIUE. This story has everything from subzero temps and floods to humans trying to trick bees into making themselves a new queen.

Our story begins with a cold, icy difficult winter. Our balcony colony is situated outside the restaurant called Fixin’s on the second floor of the Morris University Center in a little garden. It gets sun but does not have the earth below it –  it has the side of a building for a wind block instead of trees. Our colony made it through a very rough winter but in early spring upon doing our hive checks we started to see some warning signs. Several of us here at SIUE looked all through this colonies’ box and none of us saw signs of a queen.  With no visible confirmation of a queen, and no eggs or larva present, we

dialed in on this colony to watch closely and see what we could do to help it along.

The trouble is that with no queen the colony may not survive. Worker bees, named so for doing most the colony work and being the largest portion of the colony, only live for 4-6 weeks. Their life expectancy is a little different in the fall but for this time of year the clock was running, and with no queen present they were in trouble. There is only one queen and she lays all of the eggs to keep the colony moving. The drones, or the males, make up about 15 percent of a healthy colony.
So here we are in spring with little food left, and a decent number of bees present, but no one to lay eggs to keep the colony moving forward.

First we robbed eggs from colonies kept in the nature preserve on campus and installed them in the balcony colony. This was a little like a mission impossible task. You have 20 minutes for eggs to remain viable once they are removed from a hive.  So the trip from the nature preserve was mapped and timed at 5 minutes 30 seconds.  All equipment was collected and the robbing started promptly at 7 a.m. the night after a large storm. This was one of the large storms causing the Mighty Miss to jump its banks and it also washed out part of the road from the preserve back to the Morris University Center where the install needed to happen.

This resulted in an infusion of new worker bees into the colony but they didn’t turn one into a queen like we had hoped. The next idea was to bring them a queen, but they were giving us mixed messages and there can be only one. Why not make a queen from the eggs we brought you? Because you already have one? We moved some frames, or furniture, around inside the colony to see what they would do.  Has there been an unhappy queen there all along?

By now we have gone through the whole check list of possible problems and are back to… they just don’t have a queen. So a hive check in the nature preserve clues us to some queen cells. These are developing queens and this is clearly visible from the outside  because they are a much different shape that curves out and hangs down from the flat surface of the frame.  This allows more room for the largest bee, the queen bee, to develop.

Next is a second trip to rob a colony in the preserve and install this frame with the queen cells.  Not so much like mission impossible this time, with no storm, washed out road or small window of opportunity for viable eggs –  since these were already capped and much safer for travel.  However, all the drama is still there since this poor colony is nearing the end of their options.  Now we wait…

A week after the installation of the three queen cells we see that they have been taken down by the bees and the worry amps up. Did they not like those because they didn’t make them? Were they damaged in transit? Is there an unhappy queen that removed them? Who’s to know? More waiting…

Hive inspection comes around another week later and things started out not looking very promising. You start by removing the frames from one side, working your way to the other, and taking a look at the patterns of activity. What is on the frame: honey, pollen or eggs? Where is all of the bee activity in the colony?  What do they sound like? The middle of the box is usually the center of activity but not here. If we had a queen we should see eggs, but not here.

On the last side of the last frame there she is!  A brand new queen, just back from her mating flight. Finally, this colony is out of the woods, and her next step is to start laying eggs and renew this colony. They have plenty of honey and pollen and will now be able to take care of themselves.

About the Honey Bee Club at SIUE: Harvesting honey and making some money. That’s what students at the Southern Illinois University of Edwardsville are learning when it comes to their beekeeping venture. Over the last 10 years, students and a professor along with an on-campus club have built 5 beehives on the campus of SIUE. One is located in the middle of the campus, and one is on the roof of the Morris University Center above the restaurant in the building.

It takes a delicate touch to maintain the thousands of bees in each hive. The honey harvested from the hive is used by the restaurant and food service on the campus, which has provided the students with a sustainable ecological opportunity.