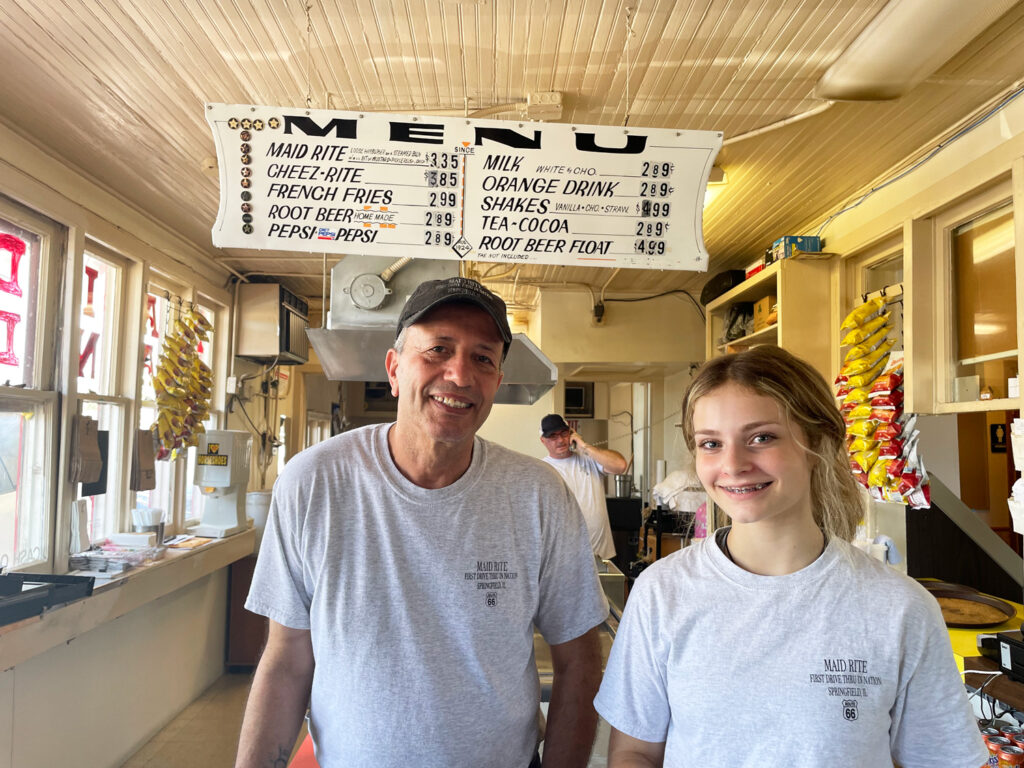 Sam Quaisi and one of his staff members flash their welcoming smiles below the historic menu board. All photos by Cheryl Eichar Jett.

A century-old caboose, housing what is said to be the oldest drive-through eatery in the U.S., still occupies its southeast corner of the intersection of Jefferson and Pasfield Streets just west of Springfield’s downtown. And after more than a quarter-century, its owner-operator, savior, and #1 advocate, Sam Quaisi, is still there, telling the little sandwich shop’s story and working the drive-through window, handing out Maid-Rite sandwiches and good cheer. It’s one of the Springfield Illinois Convention and Visitors Bureau’s favorite pride-and-joy, nostalgia-laden attractions to direct tourists to, and for good reason.

The nostalgia factor is a big deal at the Maid-Rite, as former Springfield High School students and Illinois State employees return to their old neighborhood to have a Maid-Rite and a frosty mug of root beer. Local newbies and international Route 66 travelers are looking for that sense of the past as well, and they find it in this little-changed wooden structure, thought to be the oldest sandwich shop still in operation in Springfield.

Sources disagree on when the wooden caboose arrived on the lot and when exactly the sandwich shop opened, but most agree on the mid-1920s, with the Maid-Rite itself proclaiming its official opening to be 1924. A three-stool counter still separates the kitchen space from the tiny entry, where you also had the option to enter a very small dining room – still there – which can seat about a dozen people. The structure still sports its “bead-board” ceiling and the pull-down trap door up into its cupola, which traded in its caboose look-out status for a sort of “air conditioner” which could pull fresh air in through its windows to circulate in the shop below.

After opening the sandwich shop, Arthur Knippenberg was soon dissatisfied with poor business and simply gave the operation to a friend, Clyde Holbrook, who had lost his confectionery in nearby Beardstown due to a flood. Holbrook stayed for a couple of decades, adding a storage extension on the back before selling to neighbor Cecil Evey. Evey operated it for maybe a dozen years before leasing it to other operators until 1970 when he sold it to Clarence Donley, a retired Ford Motor Company-employee. Donley added an additional dining room that could seat 30 people and saw the little eatery added to the National Register of Historic Places.

In 1995, Donley sold it to Sam Quaisi, who had worked in the food business, including several Springfield area clubs plus at the Governor’s Mansion. But working for the Illinois Department of Revenue on Jefferson Street in the mid-1990s, a friend told him that the little sandwich stands right across the street was for sale. Donley was ready to retire, Quaisi was ready to leave his office job, and the sale was official in October 1995. The Maid-Rite had a new champion, as Quaisi prized the historic nature of the shop and made no major additions or changes.

These days, the food is another big reason that both locals and travelers return – sometimes multiple times per week. Still made from the 1920s recipe, the prepared ground beef, or “loose meat,” is served on a steamed bun with onion, pickle, and mustard. The “Cheez Rite” is a later development, and french fries and house-made root beer are the perfect accompaniments. Customers in the drive-through (which once was a walk-through after parking) move through the line along the long north side of the building, where Sam Quaisi and his staff hand paper sacks of sandwiches and french fries out one of the original double-hung windows.

Quaisi’s welcoming smile, sharp memory for customers’ names, and efficiency in running a tight operation with reasonable prices also contribute to the ambiance. In fact, the Springfield tourism bureau named Quaisi along with seven other notable Springfield entrepreneurs to a pantheon of “Legendary Locals,” owners, mostly long-term, who are at the helm of some of the capital city’s most famous attractions and restaurants.

Quaisi loves to tell visitors the story of the Maid-Rite. He is multi-lingual but doesn’t mind at all when a customer fluent in yet another language steps in to communicate with an international traveler. One question that gets asked is whether this Maid-Rite is part of the Iowa Maid-Rite chain. It is not; in fact, the Maid-Rite chain was not founded until 1926. Although the Springfield eatery may have borrowed the name, it’s always been an independent business. In fact, a new owner of the Maid-Rite chain in the ’90s attempted to lay claim to this one, but Quaisi set him straight. And an earlier attempt by the chain to locate a separate Maid-Rite store in Springfield was met with the threat of a lawsuit by previous owner Donley; the new store never opened.

But after 27 years, Quaisi thinks about retiring, although he hasn’t found the right buyer yet.

In the meantime, he still arrives at 7:30 every morning to get ready for the day – preparing the meat and checking his supply of root beer. The walls are covered with snapshots and newspaper articles, and the guest books stand ready for more signatures.

“We have them sign it, and also give them a souvenir from us, a sticker or a pen that says Maid-Rite – that is for people visiting. For local people, we see them coming every other day, some of them, and some come two or three times a month,” Quaisi said. “I enjoy talking to customers, I enjoy being here.”

When in Springfield, check out the Maid-Rite. You’ll enjoy being there, too.

Cheryl Eichar-Jett is the author of numerous books and articles about Route 66. Find her at www.route66chick.com and www.cheryleicharjett.com. 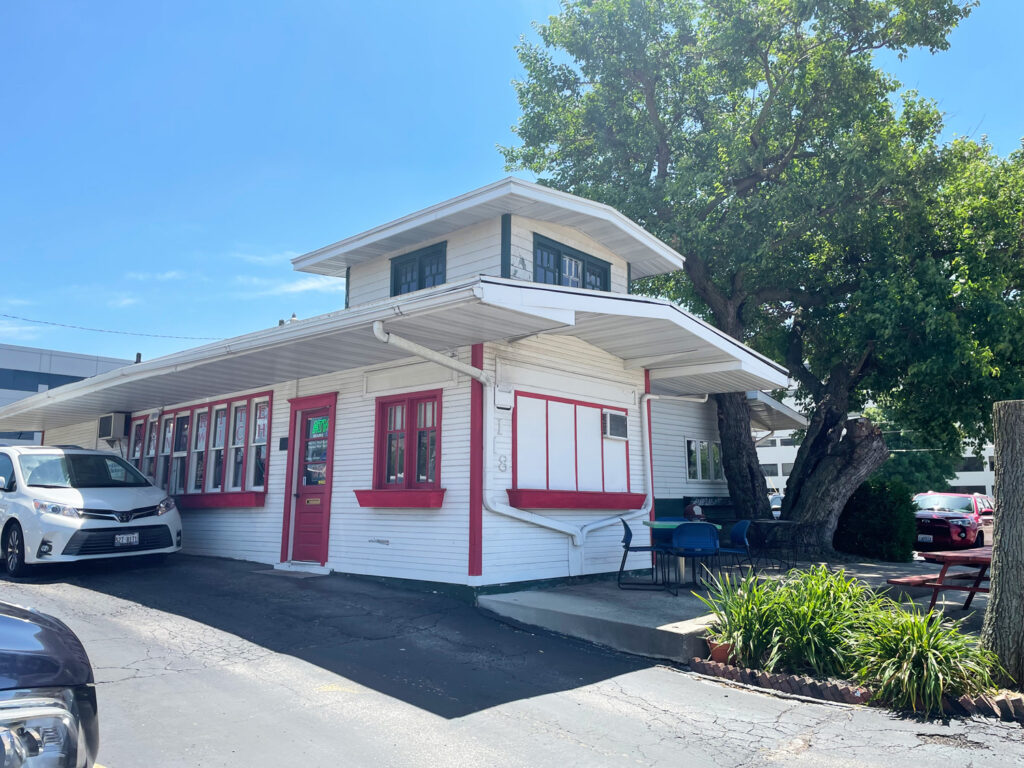 The Maid-Rite Sandwich Shop faces north at the corner of Jefferson and Pasfield.

The newer dining room dates to the ’70s or ’80s but was constructed on the back side of the structure to preserve the historic front facade. 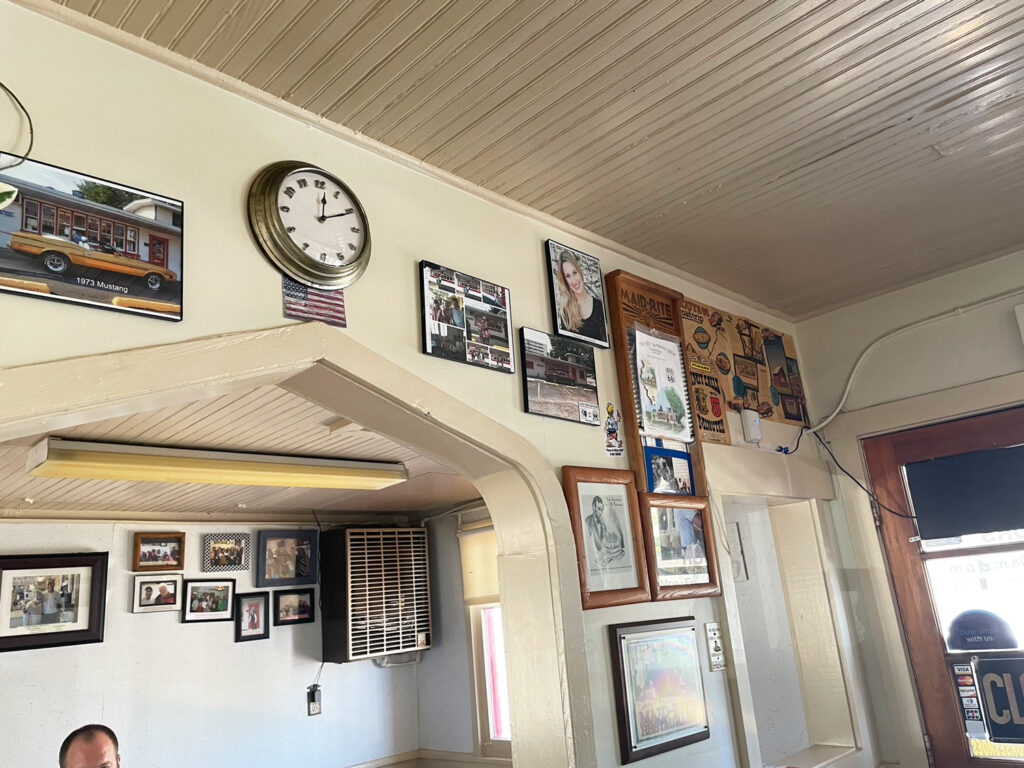 The tiny original dining room on the west end of the caboose seats about a dozen people. Memorabilia adorns the walls of the entryway. 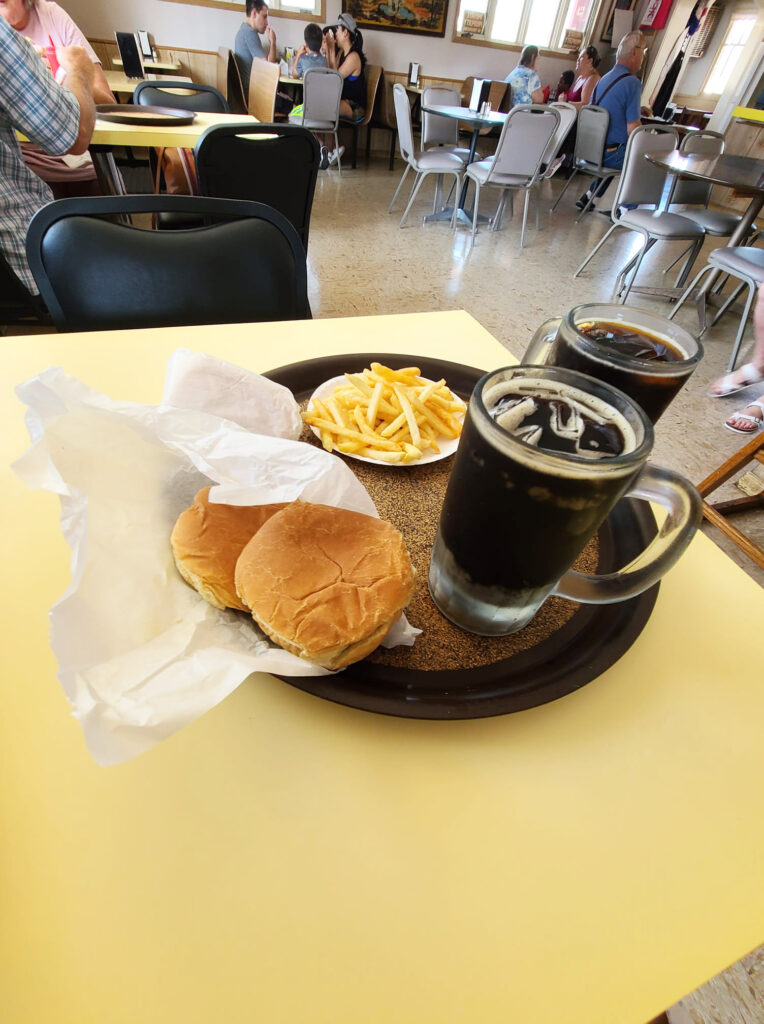