The Drive-In Theater … an American Icon 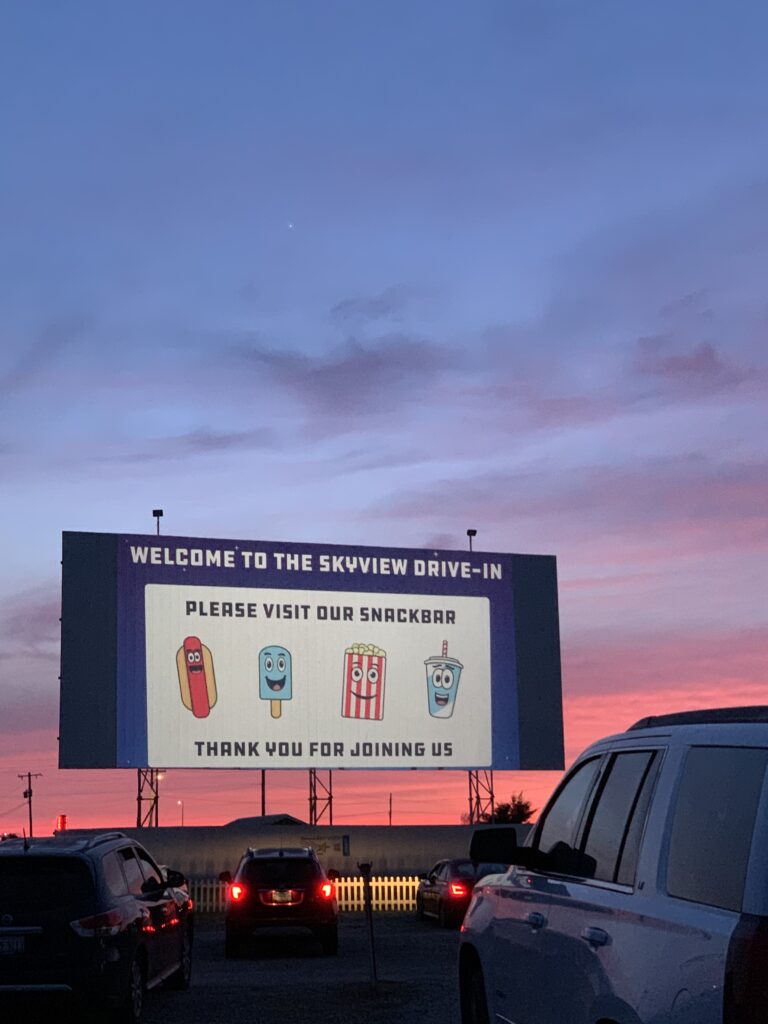 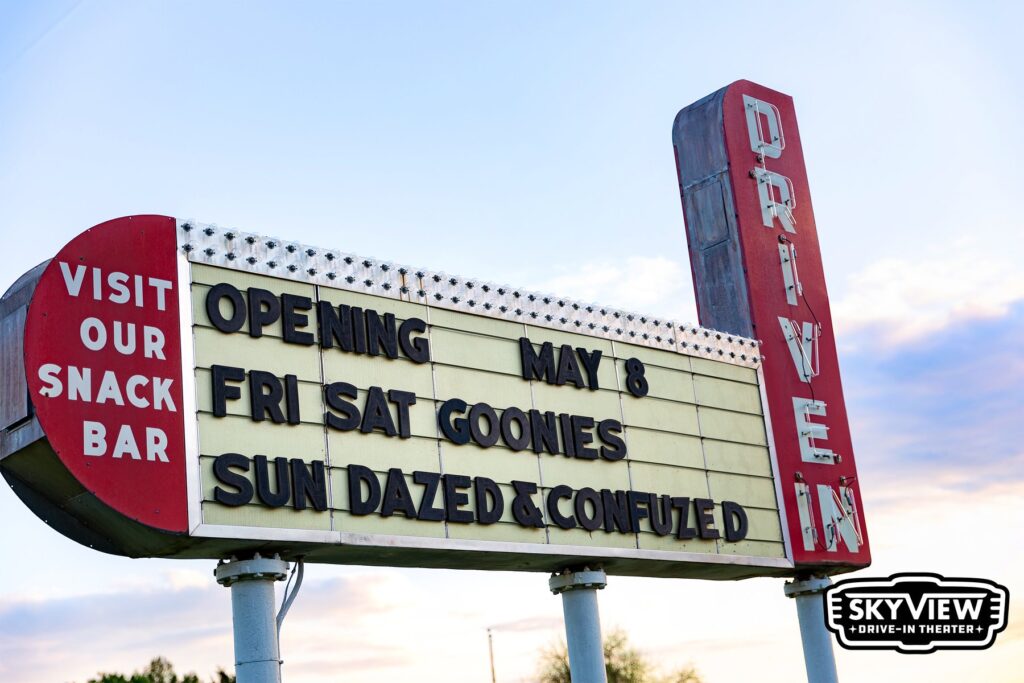 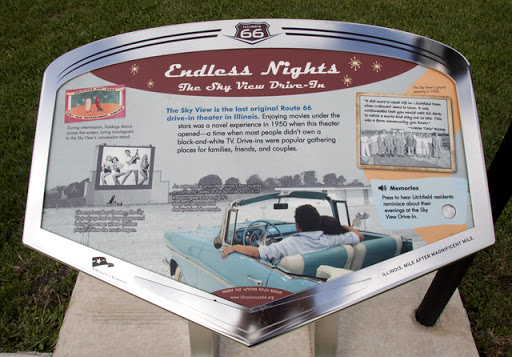 If you are reading this, chances are that you have been to a drive-in theater at some point in your life. You probably took your children, and possibly your grandchildren. But there is a chance that in the near future, the drive-in theater will no longer be an option for family entertainment. Like many great American icons, the drive-in theater is going by the wayside. I find that sad.

The drive-in movie theatre is truly an American invention, and truly an American Icon, albeit a dying one. In the early 1900s there were attempts at opening outdoor theaters, but the first true drive-in theater, as we know them today, opened on June 6, 1933, in Camden, New Jersey, by a gentleman named Richard Hollingshead. His inspiration came from watching his mother who found it uncomfortable to sit in the seats of a regular movie theater. So he began experimenting with showing movies in the driveway of his home. He tried several set up variations and finally found what he thought was the best set up for the projector, screen, sound, and spacing between cars. He applied for a patent, which was granted, and shortly thereafter opened the Automobile Movie Theatre.  Hollingshead charged 25 cents per car and 25 cents per person. His slogan was, “The whole family is welcome, regardless of how noisy the children are.”

There was a drive-in theatre where I spent my teen years. We loved going there because you could take a carload for very little money so you still had money to spend at the concession stand. You got to hang out with your friends and have a good time, and even be a little loud or rowdy, and no one minded much – because that’s just how it was at the drive-in.

In more recent years I took my grandchildren to the Skyview Drive-in in Litchfield. It was a frequent excursion for us. 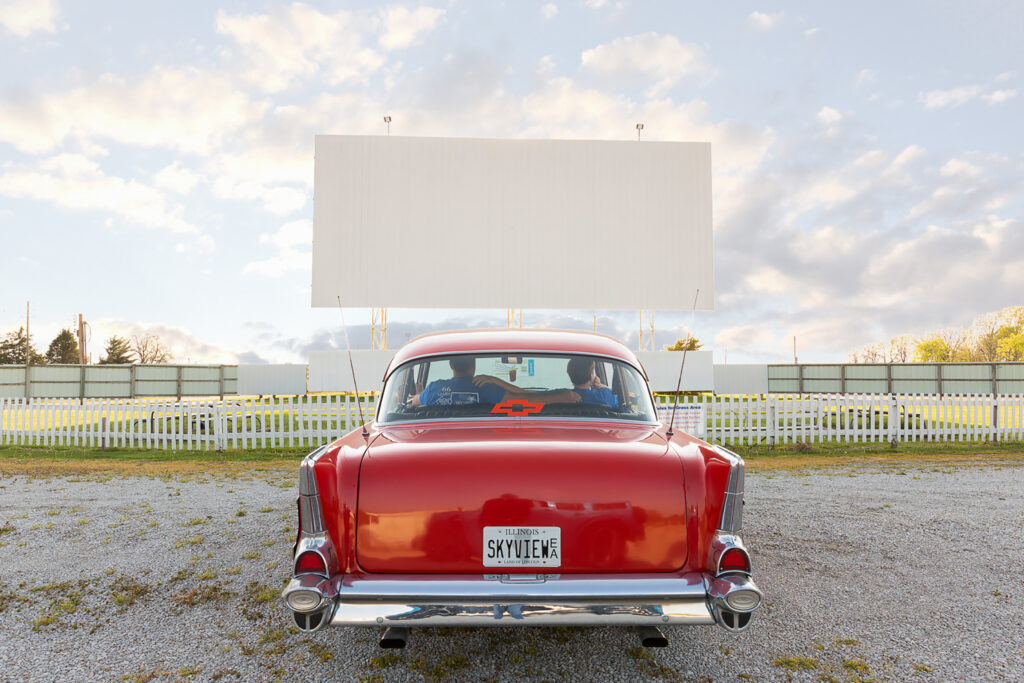 I think they loved running around and playing football, soccer, and frisbee with the older kids in the green area beneath the big screen as much as they enjoyed sitting in lawn chairs outside the vehicle, wrapped in blankets, munching their popcorn and watching the maybe “not so latest” movie – but still possibly one they had not seen. Back then the drive-in usually featured two movies, for much less than the price of one at the regular theater. But the grandkids rarely remained awake until the end of the second feature. Often, neither did I.

Hollingshead never made a profit with his Automobile Movie Theatre and sold it several years later to a new owner who moved it to another location. The concept of the drive-in theater caught on though and expanded rapidly. By 1940 there were over 20 drive-ins that had opened across the United States. Eventually, Hollingshead’s patent was ruled invalid and it was at that point that the number of drive-ins exploded. With the patent invalid, anyone could open a drive-in theater without having to pay royalties. Drive-in numbers peaked in the late 1950s – early 1960s. During that time, generally considered the golden age of drive-ins, there were over 4,000 drive-in theaters across the United States. But that golden age didn’t last, and in the 1970s the number of drive-ins began to decline rapidly.

Drive-ins are an important part of American pop-culture history, and they remind people of the “good old days” but now, the number of drive-ins that are still in operation are few and far between. In fact, there are only around 300 drive-ins in the entire United States today. Nine of those are in Illinois – Earlville, Galesburg, Gibson City, McHenry, Newton, and Sterling… and in The Buzz coverage area, Belleville, Springfield, and Litchfield – the location of the drive-in featured in this story.

The Skyview Drive-in in Litchfield is one of only four drive-ins left operating on Historic Route 66 in the entire United States, and the only one on Route 66 in Illinois. The Skyview opened in 1950 and has been in seasonal operation ever since. This year marks the theater’s 70th Anniversary.

The Sky View is in the Route 66 Hall of Fame and hosts a Wayside Exhibit at the front of the property. This exhibit, placed by the Scenic Byway, tells stories of patrons and some history of the property.

Originally owned and operated by Frisina Enterprises, The Skyview was sold to Mid America Theaters, and eventually to Norman and Del Paul. The Paul family sold the theater on March 1, 2016, to Pastro Properties Inc, comprised of Litchfield residents and business owners, Mike, Debbie, Nick, and Mindy Pastrovich,  The Pastrovich family has enjoyed taking a more hands-on approach of the theatre over the last four years and is excited to be a part of both local and Route 66 history.

In the 1990s to early 2000s, there seemed to be a modest comeback in drive-in theaters. But the industry was dealt a crippling blow when the movie industry started converting movies from film to digital format. It saved the movie industry significant amounts of money but required drive-in theaters to purchase new and expensive projectors (that could cost over $60,000 each). However, some survived. The Skyview in Litchfield is one that did.

Today many drive-ins have found creative ways to stay operational. There are a number of large drive-ins on the West Coast, in Texas and in Florida that hold weekly Swap Meets on their lots on the weekends. The booth rental revenue they obtain from the Swap Meets helps them stay in business. They are also several drive-ins that have been kept open by charitable efforts from their local communities through fundraising drives to help them secure the funds needed to purchase digital projectors. And there are even a few drive-ins that were taken over by the local governments or local social organizations and turned into non-profits to keep them afloat. The hope is, that with these efforts and more, we can not only keep the drive-ins we have now but foster an environment in which more can operate profitably.

The Skyview Drive-In in Litchfield is also researching additional opportunities to create enough revenue to keep it open and profitable.  Photoshoots can be scheduled at the drive-in, through Minndora’s Specialty Photography (owned by one of the drive-in’s owners, Mindy Pastrovich). Currently, the theater is working on an overnight excursion for the Girl Scouts. Live concerts and comedy shows are also a consideration. And the drive-in’s season will culminate with an event the Pastrovich family implemented since they took ownership, their annual Scavenger Hunt and Classic Car Show. This event is co-sponsored by Creepers Car Club. Hints for the Scavenger Hunt this year are still undetermined due to the complications from COVID-19 but most likely they will be shared via the Skyview Drive-In and Creepers Car Club websites and Facebook pages. Participants can find “stickers” of various classic cars throughout the summer months, and possibly even find swag bags of items that may include Skyview tickets and other goodies. The hunt ends with a classic car show at the Skyview Drive-In.

Things are a little different at the Skyview right now due to COVID-19 restrictions.  They have 700 spaces for cars, but now can only fill half of those, as every other space must be left empty. At the time of printing, it was required that you must remain in your car unless using the restroom or visiting the concession stand, at which time you must maintain social distancing. That meant no sitting in the backs of, or outside of, your vehicle. You cannot open your back hatch. The bathrooms are cleaned regularly and the staff wears masks and gloves.

That may not be the same experience you remember at the drive-in, but by following these guidelines, it allows them to be open to provide you and your family an opportunity to get out, relax and have a good time. And although the kids are not allowed to run and play in the “green” area before the movie, the Skyview is working on ways to keep the younger clientele entertained.

“On opening night this season the ladies from The Briar Rose here in Litchfield came out in their dinosaur costumes to entertain the children,” Mindy Pastrovich said. “Our focus is on providing quality, affordable entertainment for the entire family.”

Plus, information released around the time of printing indicates that possibly by the time you read this, you will be able to open and sit in your hatch or sit in lawn chairs outside your vehicles.

The Skyview Drive-In is located at 1500 N Historic Old Route 66. Movies are shown every Friday and Saturday, and every second Sunday, through October 11 (this year). Gates open at 7:30 p.m. and movies start at dusk (approximately 8:30). Admission is $7 per person (ages 5 and under are free).

A hotline is set up, for current information call 217-324-4451. You can also find them on Facebook for additional details or visit www.LitchfieldSkyview.com.

The season-closing car show event at the Skyview Drive-In will be Saturday, October 17. Admission is $10 (5 and under free) and includes the car show and movie.

For more information about the Skyview Drive-In in Litchfield, public relations, or events, contact Mindy Pastrovich at 217-556-1929 or email [email protected]