THE HEALING POWER OF PET MASSAGE 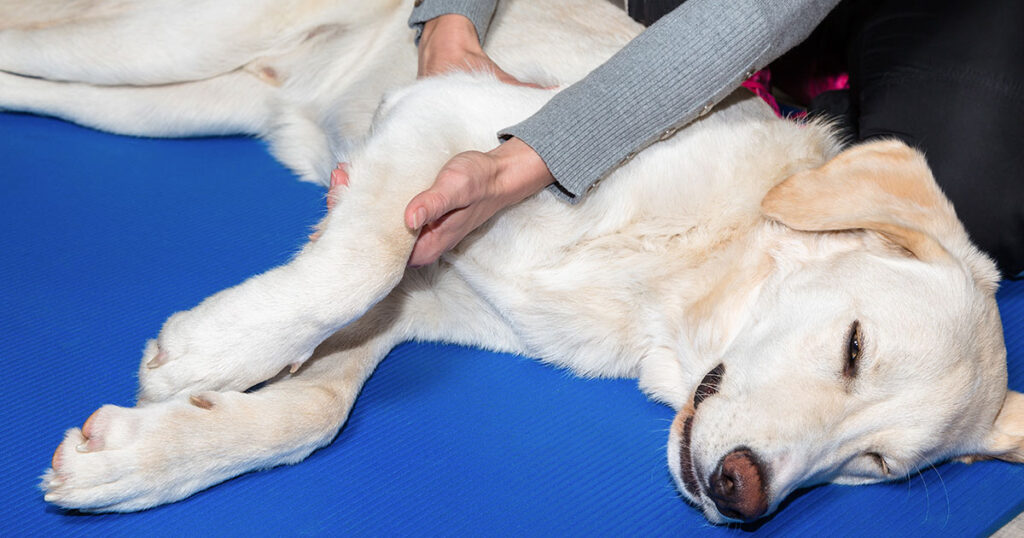 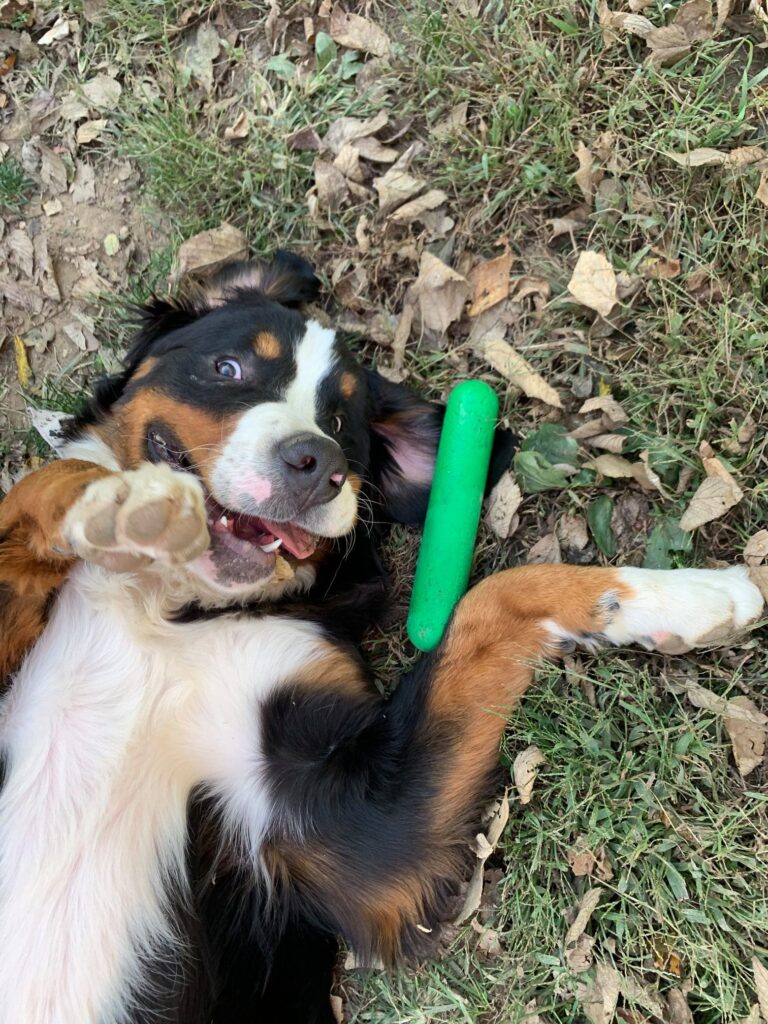 Having a good time at doggy daycare.

About nine years ago we ran a story on LaBest, Inc. in Edwardsville. The story came because we had just gotten a new Doberman puppy, Cezar, and chose LaBest to help with his training. We were impressed with them.

Our opinion of LaBest has changed – it’s actually been elevated. I will elaborate, but let me give you some background first.
If you are a pet owner who loves their pets as we do, you will be happy to have this information.
Deb Walker, owner of LaBest (daughter Julia is now co-owner) was raised in a family that showed dogs. Deb began training dogs at the early age of nine years old.  That may seem young, but when you have been around it all your life, it comes naturally.
When Deb was 11 they had several Malamutes at a show. Deb had never been in a show ring with the dogs before, but this show had a Junior Showmanship class.  She asked if she could enter. Entry fees are normally quite expensive, so her mother said no – until they found out the junior class was free.
Deb explained, “Mother told me three things before I went into the ring, and that’s all she said. 1) keep two eyes on the judge and one on the dog; 2) never come between the dog and the judge; 3) stack the dog.”
(Stacking is the process of correctly presenting a show dog to its best advantage by the breed standard. The dogs should be trained to stand in the right position, but often they move, so the handler puts their legs back in the proper position.)
Deb’s parents wanted to expand their operation and had a building constructed for a grooming facility, and even paid for a woman to attend grooming school. But at the last moment, she backed out. What were they going to do now? Daughter Deb got the grooming training, and stepped gracefully and naturally into that role, at the age of 14.
With an innate love for animals and years of experience to back her, Deb opened  LaBest, Inc in Edwardsville in 1993. LaBest provides boarding, training, doggy daycare, grooming, tartar removal from teeth without sedation, and  –  the main reason for this updated story – pet massage.
I knew about the services LaBest offered, (except massage) because we took Cezar to training classes at LaBest. Later, when we vacationed, we boarded Cezar and Bella (adopted from IL Doberman Rescue when Cezar was a year old), at LaBest, knowing they would receive the best of care. (We paid for our dogs to have a private suite with cots, a window, and even television – not kidding, they have that!) 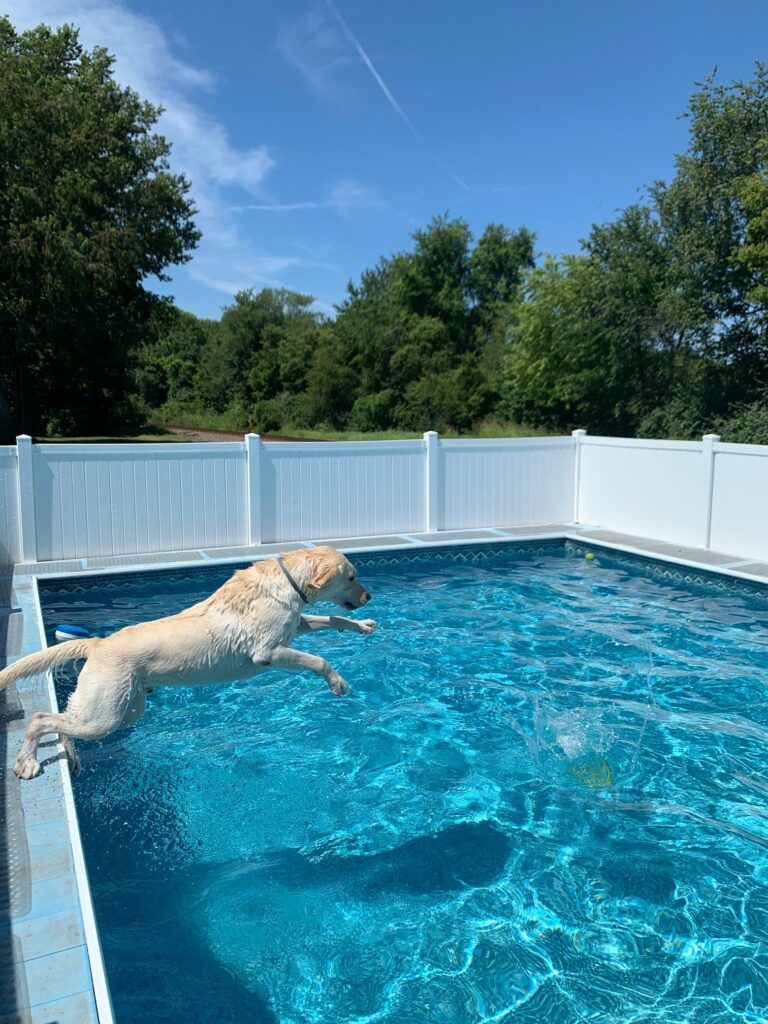 LaBest even has a swimming pool for daycare clients that are so inclined!

Symptoms you may observe in your pet might include:

. Showing signs of lameness
. Refusing a collar or harness
. Doesn’t want to be touched in certain areas
. No longer desire to jump up on furniture
. Stiffness anywhere in their body
. Unable to walk or move
. Dragging back legs when walking
. Favoring one side when walking
. Becomes incontinent (urinary or fecal)
. Develops problem with digestion
. Show poor performance in activities
. Slipping and/or shuffling
Deb Walker owns and operates one of the leading state-of-the-art animal care facilities in the state. She is a Certified Pet Trainer and Pet Behavioral Specialist as well as a Certified Master Pet Stylist Meritus. She gives symposiums all across the country for the animal service industry, rescue groups, and the private sector.
Her knowledge is unquestionable. But that knowledge, without her heart, and love of animals, would be shallow. That’s the difference between Deb and many others with similar credentials.
Deb cares. An example of her golden heart is that she helped save 29 Katrina pets in Mississippi by assisting the staff at Friend Sanctuary in Tylertown in how to deal with the traumas the animals were suffering from. But little closer to home…when it was determined that it was time to say goodbye to Cezar, Deb didn’t just confirm my fears and send me on my way, especially finding out that my vet was not available that day. She helped me locate a nearby vet and stayed with me through it all.
The moral of the story is, LaBest, Inc, in Edwardsville, in my opinion, is simply “the best. For grooming, daycare, training, boarding – and massage. She, and each and every one of her staff,  love your pet as much as you do. If you have an animal (she provides all services for both dogs and cats and boarding is also available for small animals, aviary, and reptiles), that has some issues that have not been alleviated with traditional medical intervention, please reach out to Deb. If she doesn’t believe she can help you, she will tell you. But if she can, she will.
LaBest, Inc is located at 4933 Indian Hills Drive in Edwardsville. They can be reached at 618-692-6399. More information can also be found at www.labestinc.net or find them on Facebook. 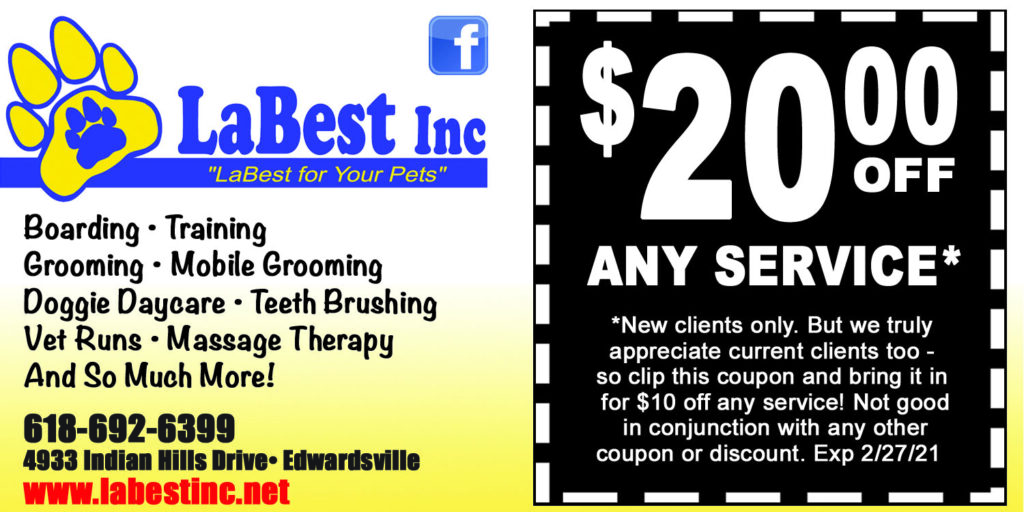