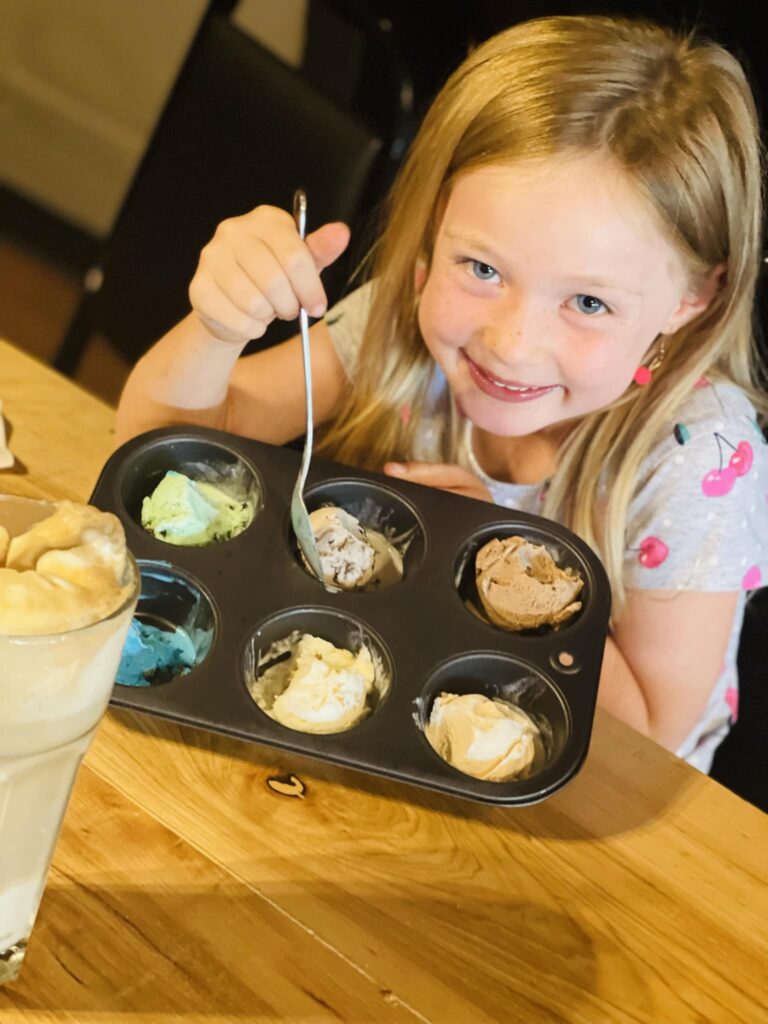 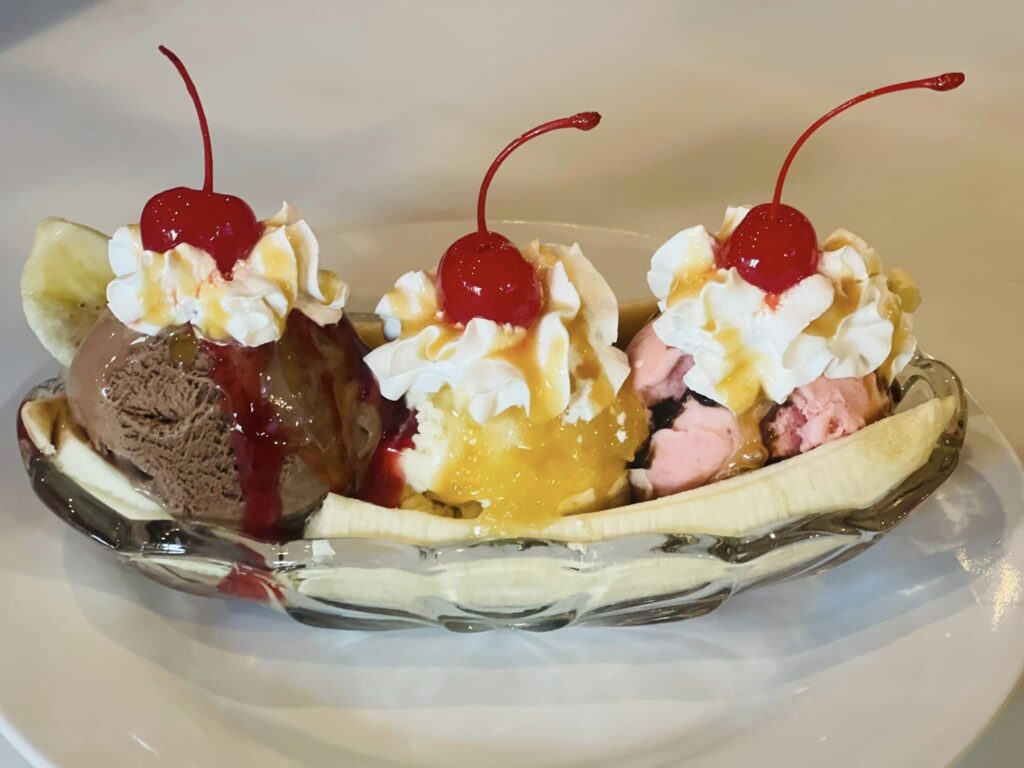 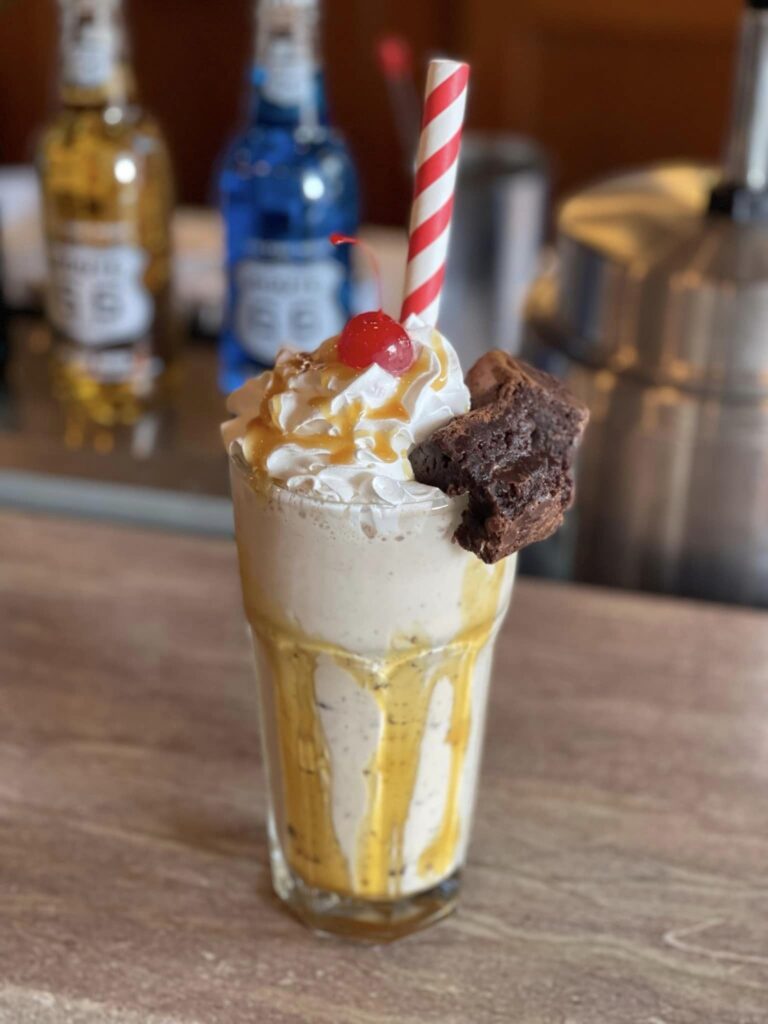 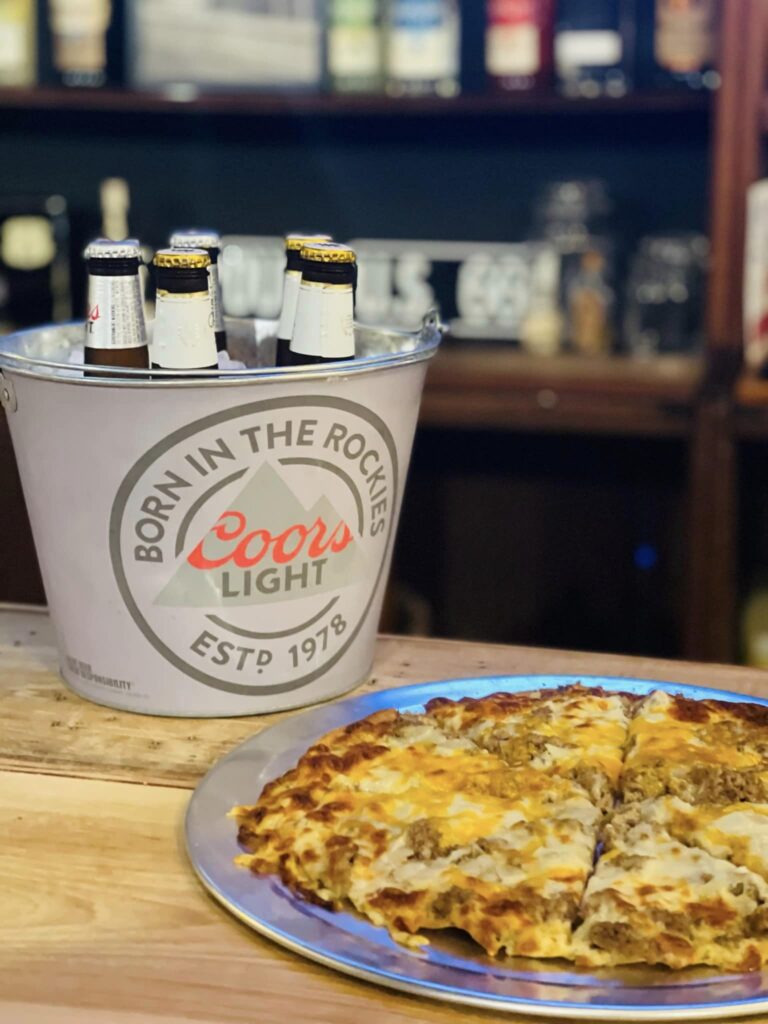 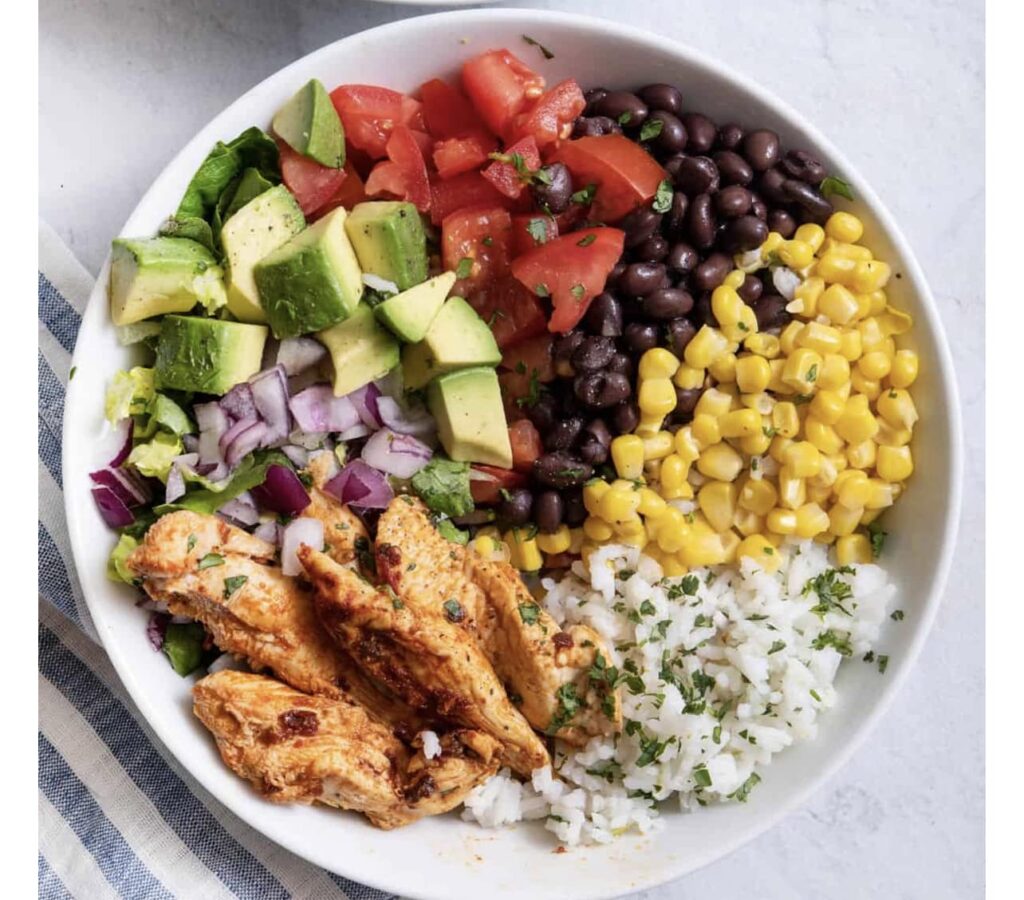 Docs Just Off 66 is one of the few scoop shops in Illinois and they offer ice cream flights – your choice of 6 ice cream flavors on one tasting tray. The original soda fountain remains to offer old-fashioned phosphate/syrup soda fountain drinks, ice cream creations, and more! Docs is open for lunch and dinner daily from 11 am – 8 pm. Kids eat free from the kids’ menu, dine in only, from 4 – 8 pm on Sundays. A new lounge has been added with adult beverages and a popular electronic gaming area. One of the yummy menu items – the burrito bowl.

Many of you are familiar with what was formerly Doc’s Soda Fountain in Girard, IL, about 25 miles south of Springfield on Route 4. It’s been a favorite stop for locals and traveler’s on Historic Route 66 for decades. Originally Deck’s Drug Store, it was opened in March of 1884 by Lewis C. Deck and B.F. Clark. The store sold drugs, groceries, and hardware and was known as “The White Drug Store” as it was the only building front on the Girard square that was painted white from top to bottom. A soda fountain was added to the business in 1930. Eventually, Deck became the sole proprietor.

Brothers Bob and Bill Deck (sons of Louis W. Deck and Naomi Deck) became the third-generation operators of the drugstore when they took over in 1960. Bob was also a pharmacist which was the instigation for the addition of a pharmacy museum, displaying old patent medicines and remedies, early equipment and fixtures, advertising, and other items dating back to 1884. Throughout many changes, the old-fashioned soda fountain, the familiar marble top counter, the original hardwood floors, and other shelving and showcases greeted people. After a lifetime of serving the Girard area, Bob and Bill decided to retire. After three generations and 117 years of the Deck family operating the drugstore, it was time for new owners.

Between 2001 and 2006, there were a few different owners. In 2007 Bob and Renee Ernst purchased the drugstore building and called their new business, Doc’s Soda Fountain, adding a restaurant, decked out in a 1920s Coca-Cola theme. The Ernsts asked if the Deck brothers would be willing to move their pharmacy museum into the building with the soda fountain, and they agreed. The brothers could even be found there frequently over the years,  providing free tours of the museum.

Doc’s Soda Fountain and Deck’s Pharmacy Museum changed hands once again in December of 2021 when Steve and Casey Claypool purchased the iconic attraction.

“We had talked about owning a restaurant and bar, but not just anywhere,” Casey explained. “We wanted something with history, a location that could possibly revive a small town.”

Casey, who is Executive Director of Illinois Route 66 Scenic Byway, overseeing the route between Chicago and St. Louis, learned of the availability of Docs and the couple agreed it was perfect for what they had in mind.

“We wanted to preserve the history and nostalgia of the building and business, but we also had some modern updates in mind,” she continued.

After six months of renovations, and a slight name change, Docs Just Off 66 reopened in June 2022 with renewed fervor.  The nostalgic soda fountain, including the original marble bar and bar stools from the 30s, and the Deck brother’s pharmacy collection still remain. Old photos displaying the history of the building and business line the walls. Even the back bar, which had been sold at some point over the years and thought to be gone forever, was rediscovered and lovingly put back in place, now the focal attraction of the new lounge area. The restaurant has been expanded, and so have the hours. Formerly you could dine only between 11 am-2 pm on weekdays. Docs Just Off 66 is open for lunch and dinner seven days a week from 11 am-8 pm. The menu is simple, featuring mostly soups, salads, and sandwiches, but they offer nightly dinner specials daily that range from spaghetti and meatballs, lasagna, or chicken alfredo to ribeye steaks, roasted pork loin, and pan-fried chicken. Docs features pastries and baked goods from the Apple Barn in Chatham, and Casey announced that they are in the process of developing a signature dessert that will only be available at Docs.

“People love our online ordering and curbside pick-up,” Casey added. “Order from your computer or phone,  pay online, then call when you get here and we will run it out!”

The lounge area features bottled beers and mixed drinks, NFL games on the televisions, a happy hour Monday-Friday and a separate gaming area. “Our gaming area is popular as well,” Casey said. “Many people have thanked us for adding a safe, comfortable, and relaxing gaming room to our establishment.”

Also new is the addition of Ice Cream Factory ice cream, which has recently made quite a hit across the nation. If you have tried it, you know why! Docs does sell it in the small individual pints like you can find in hundreds of locations locally, but unlike most places that carry it, Docs is one of the few scoop shops in Illinois, so you can buy it by the scoop, in a cone, add it to an ice cream float or try an ice cream flight – one of their most popular offerings. The flight is a tray with six individual serving spaces (like a muffin tin) so you can get a small scoop of six different flavors of ice cream. I haven’t tried all flavors but the ones that I have tried are amazing – blackberry cobbler, strawberry cheesecake, and Tiger King (cake batter ice cream with swirls of smooth buttercream icing and the perfect pieces of chocolate sandwich cookie packed inside) – there are 30 flavors in all and Docs carries twelve of their most popular flavors plus vanilla, chocolate, and strawberry. Soda fountain drinks are made just like the old days, with phosphates and syrup, and served, of course, at the original soda fountain counter.

The Claypool’s daughter Madalyn manages the day-to-day operations but you can find Steve and/or Casey several nights and week and on Saturdays and Sundays. And even though Docs has gone through some major changes already, the Claypools say there aren’t finished just yet!

“We have a new outside sign coming soon and are probably going to start staying open later on Friday and Saturday nights,” Casey said. “We are also planning to install a ‘parklet’ with outdoor seating.”

The Claypools already have some entertainment and activities such as paint nights (the next paint night is January 15 from 4-7 pm) and local musicians but are looking into also hosting game/trivia nights, live music on a regular basis, and more.

If you’ve never been to Doc’s Soda Fountain – now Docs Just Off 66 – put it on your list of things to do. If you visited before, it’s time to go back now that it has reopened with a new name and a new focus. The Claypools have taken a good thing and made it even better. You won’t be disappointed!

Docs Just Off 66 is located at 133 S. 2nd Street in Girard, just a block off Route 66 on the Girard downtown square. They are open daily from 11 am – 8 pm. Visit docsoff66.com for more information and some really cool old photos too. Follow them on Facebook to stay updated on daily specials, upcoming events, and more. 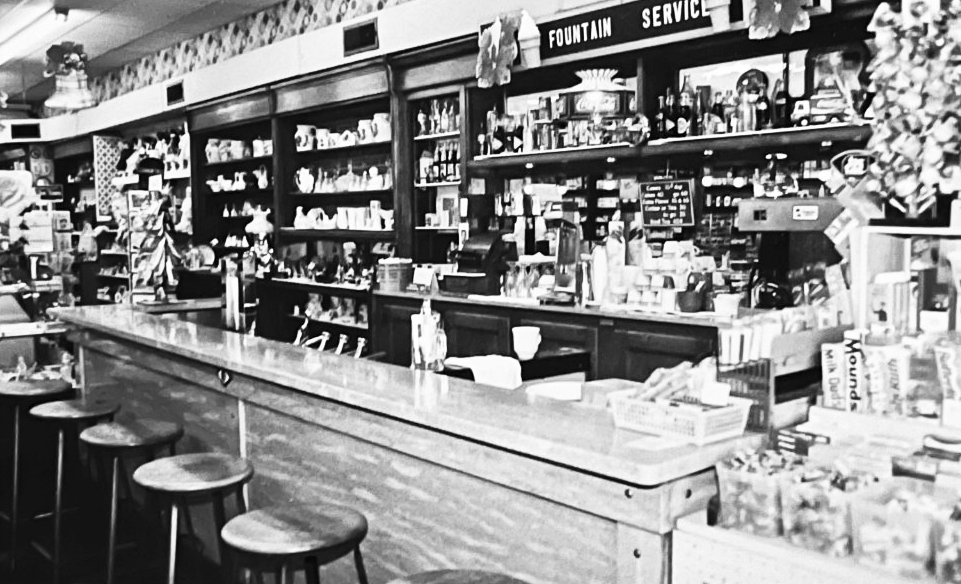 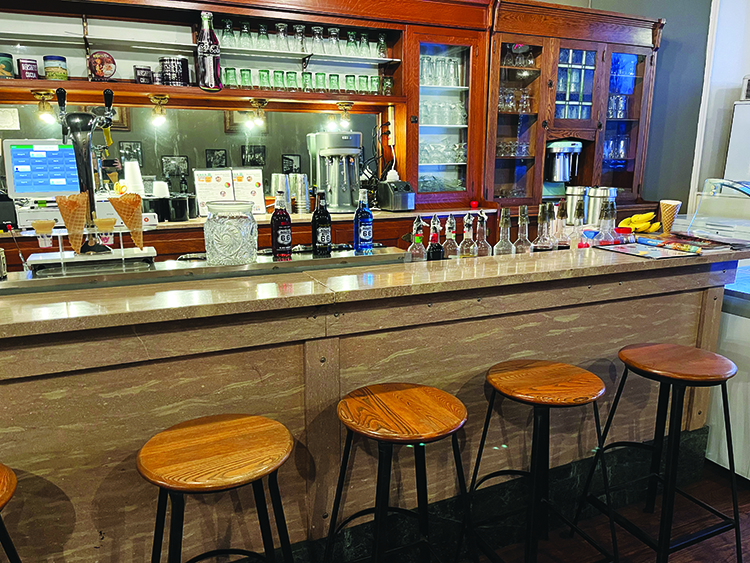 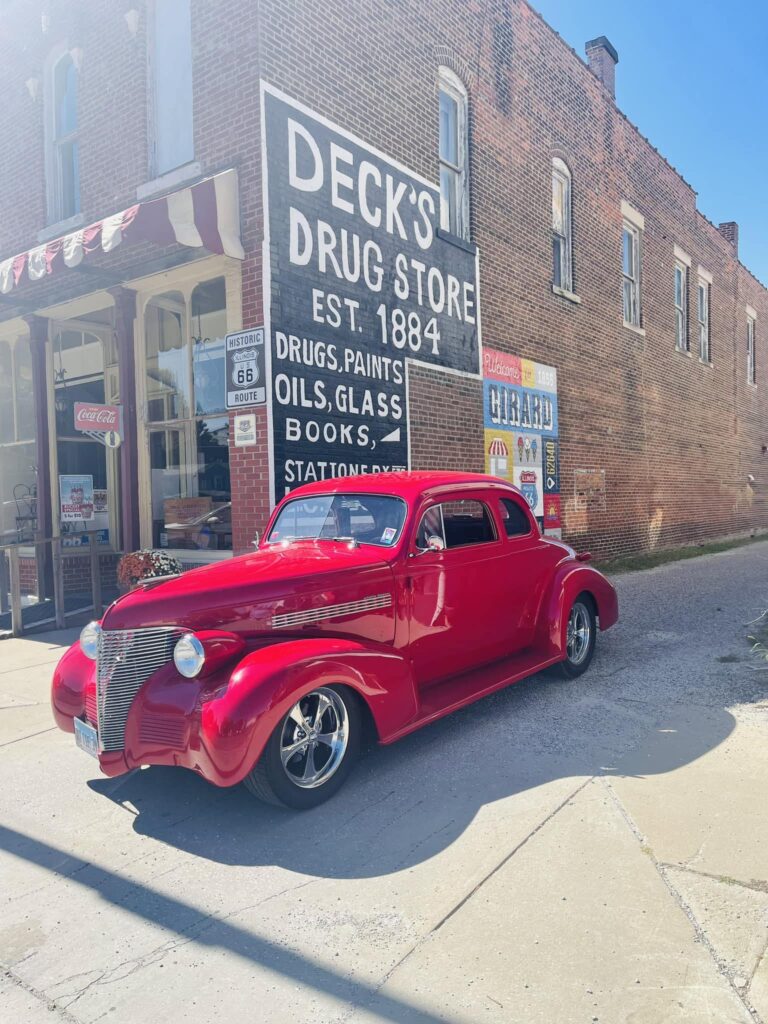 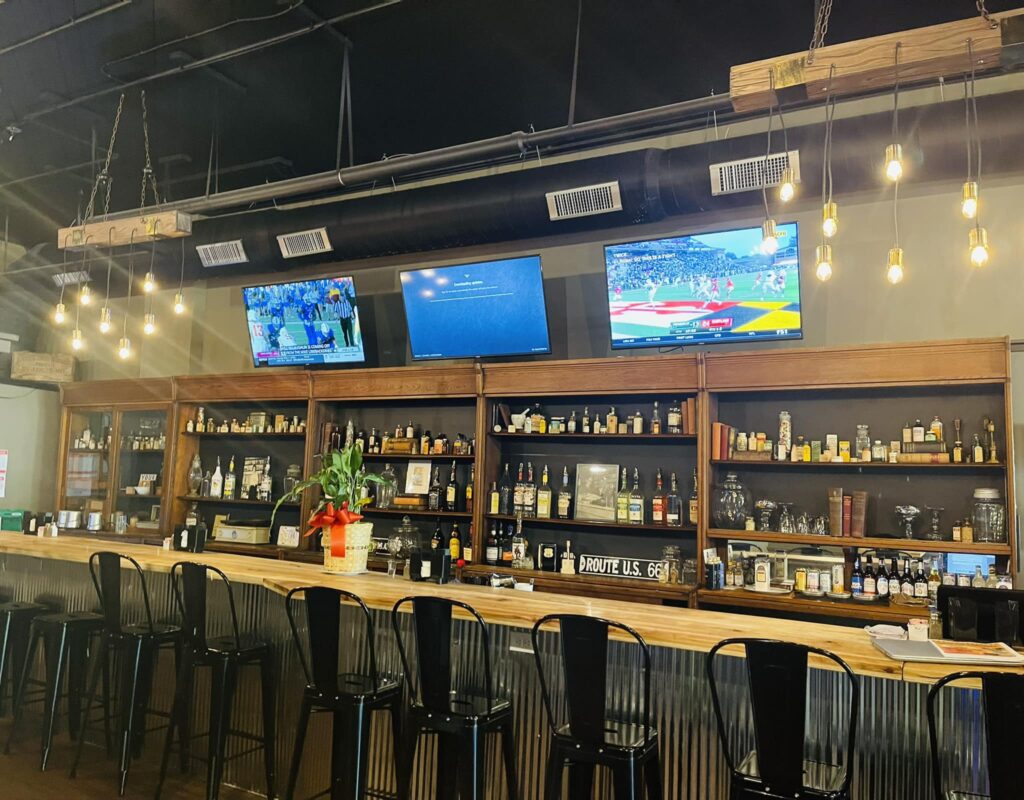 Docs Just Off 66 in Girard, IL is in the same building occupied by the original Deck’s Drug Store and Doc’s Soda Fountain. The original soda fountain, installed in the drug store in the ’30s, retains its same space and location inside Docs. Nostalgic and historic old patent medicines, remedies, and early pharmaceutical equipment from the Deck Brother’s Pharmacy Museum are still a part of the nostalgic decor throughout the building, including the new lounge area.